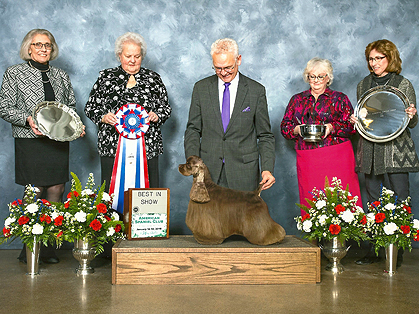 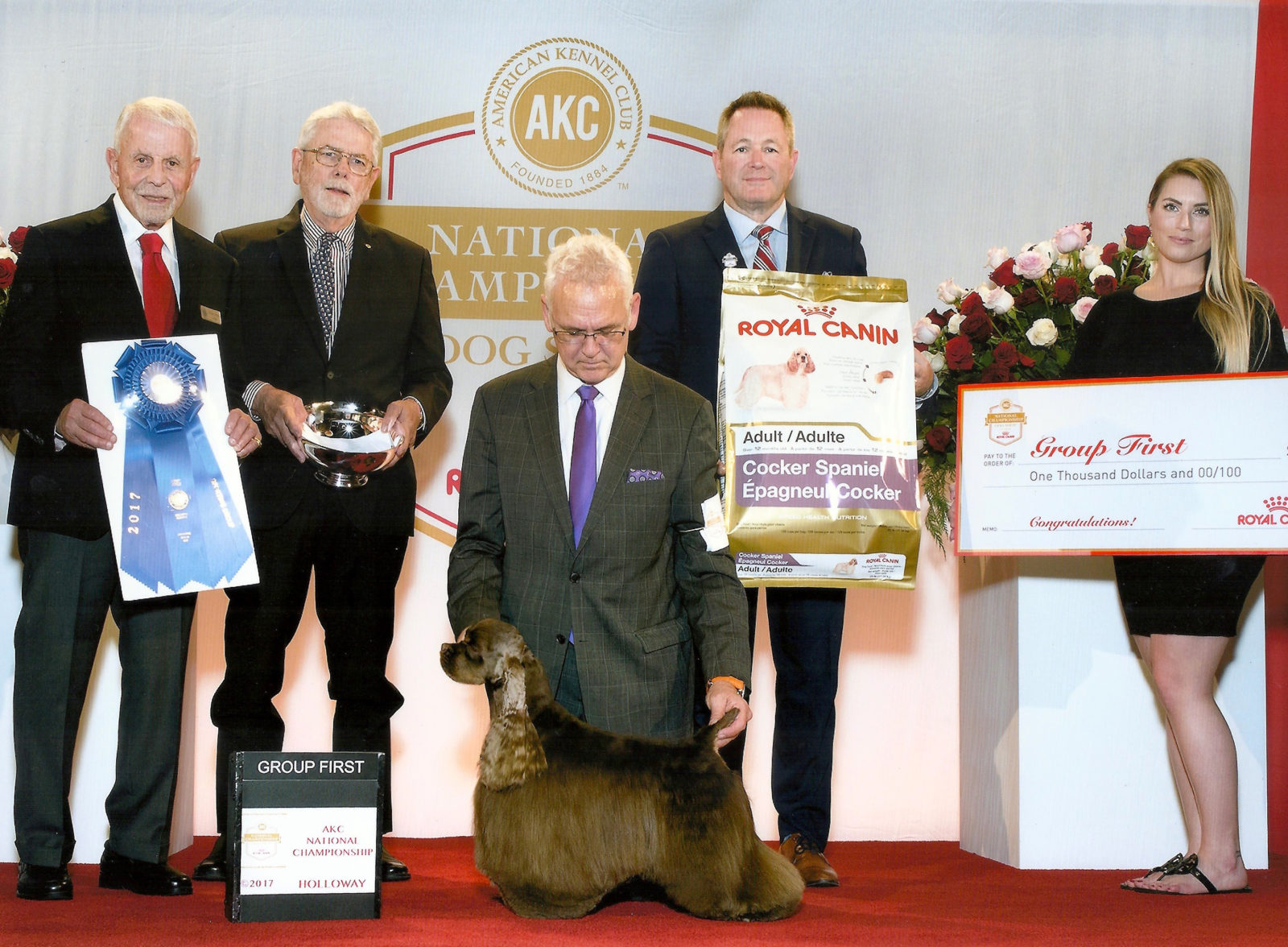 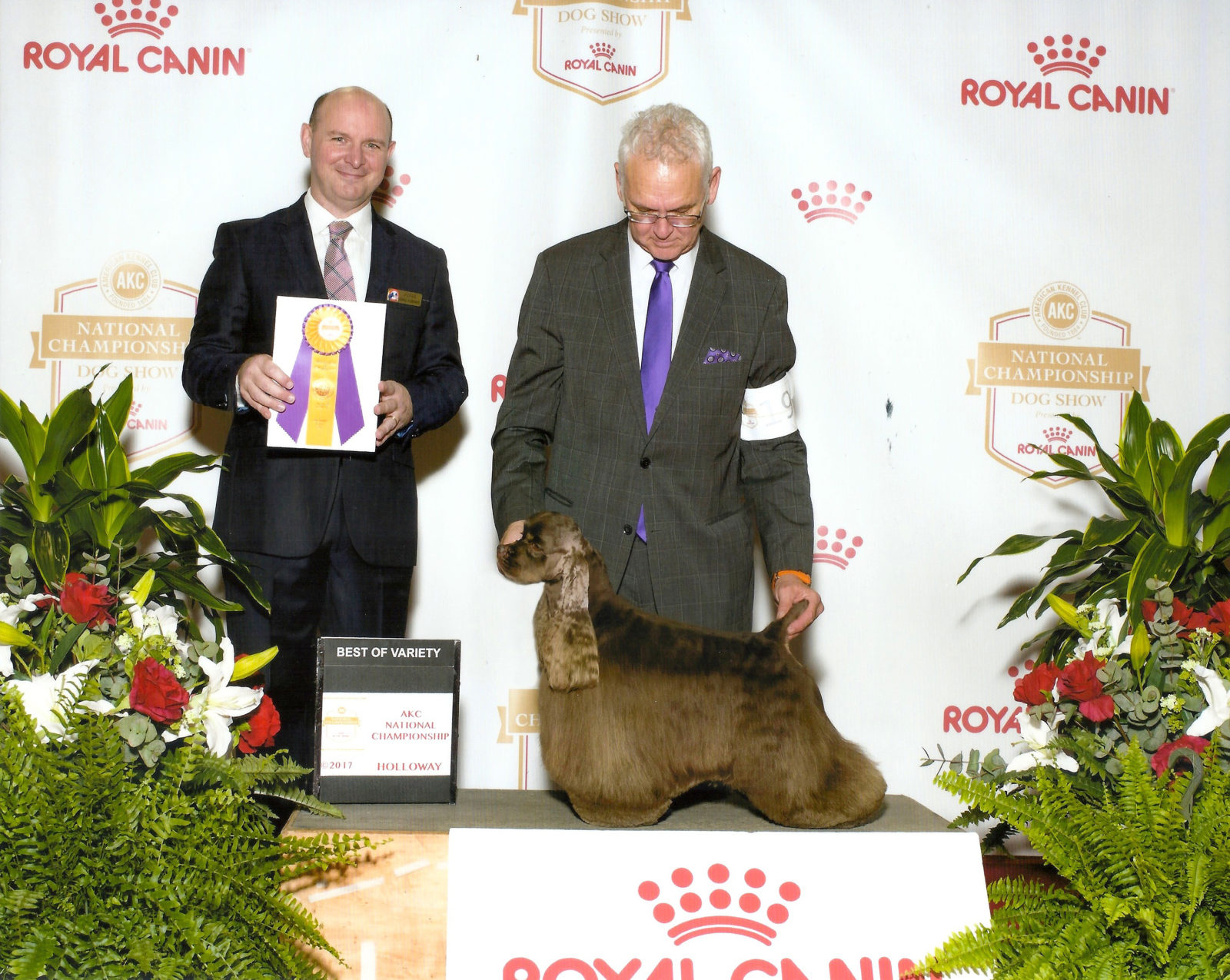 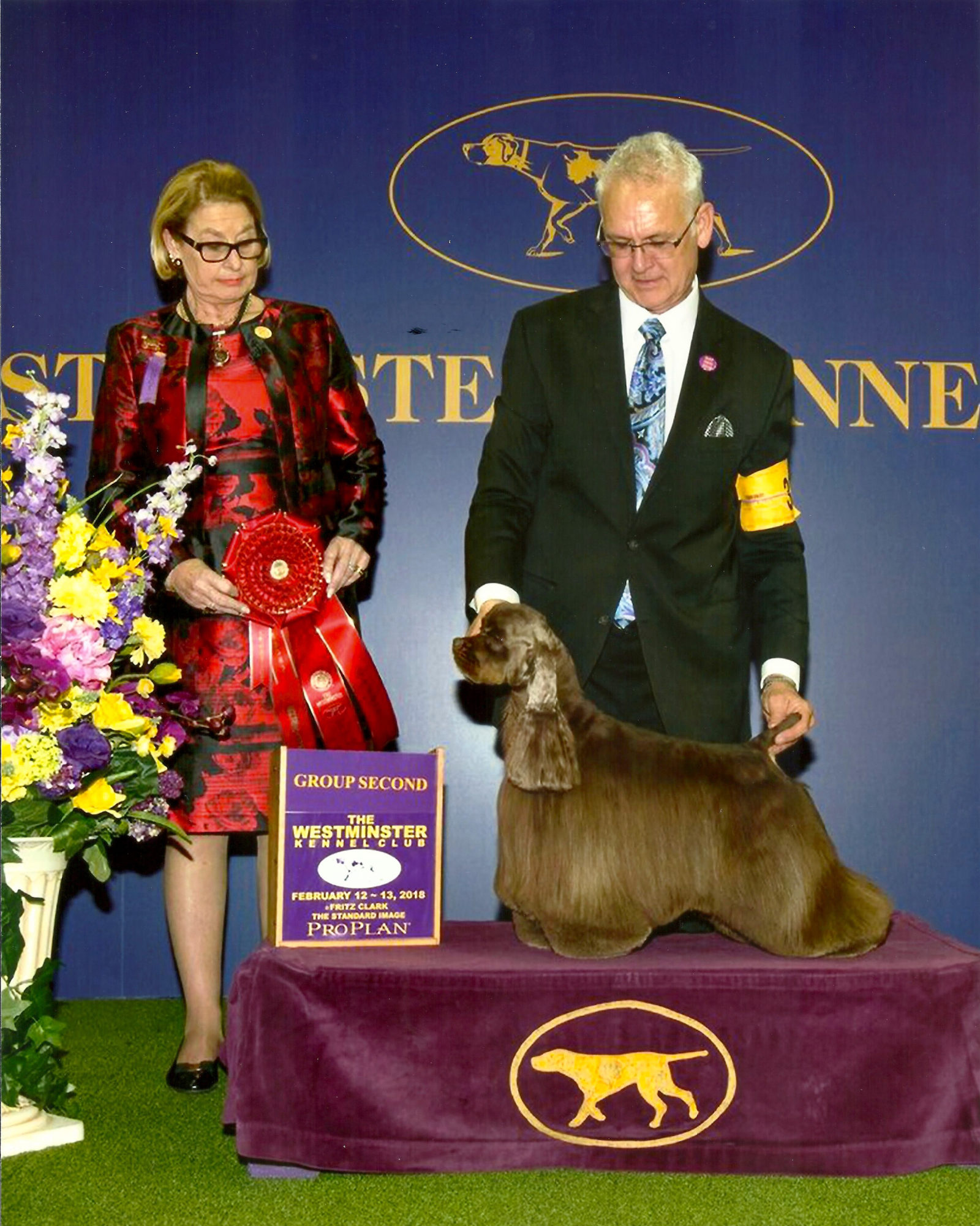 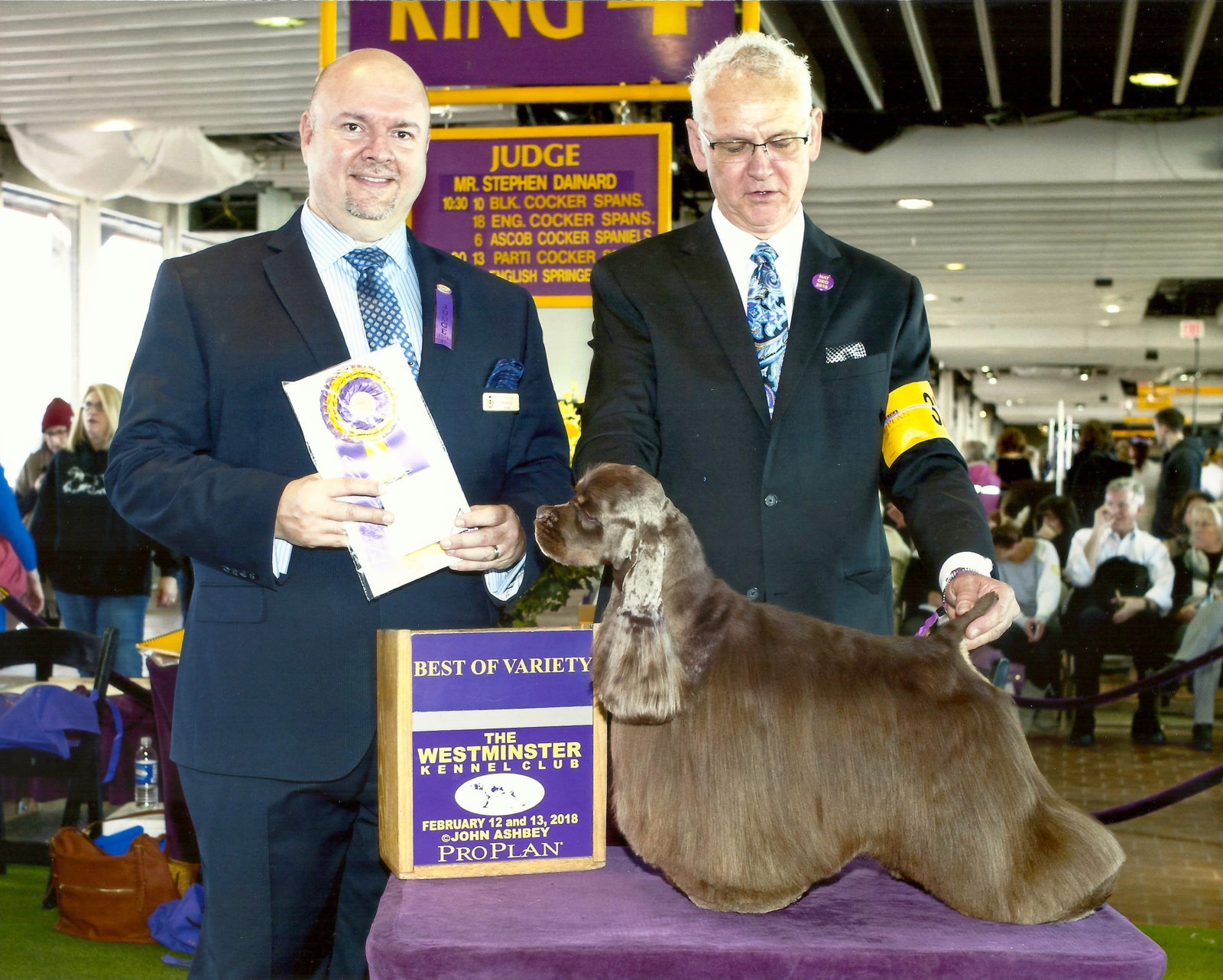 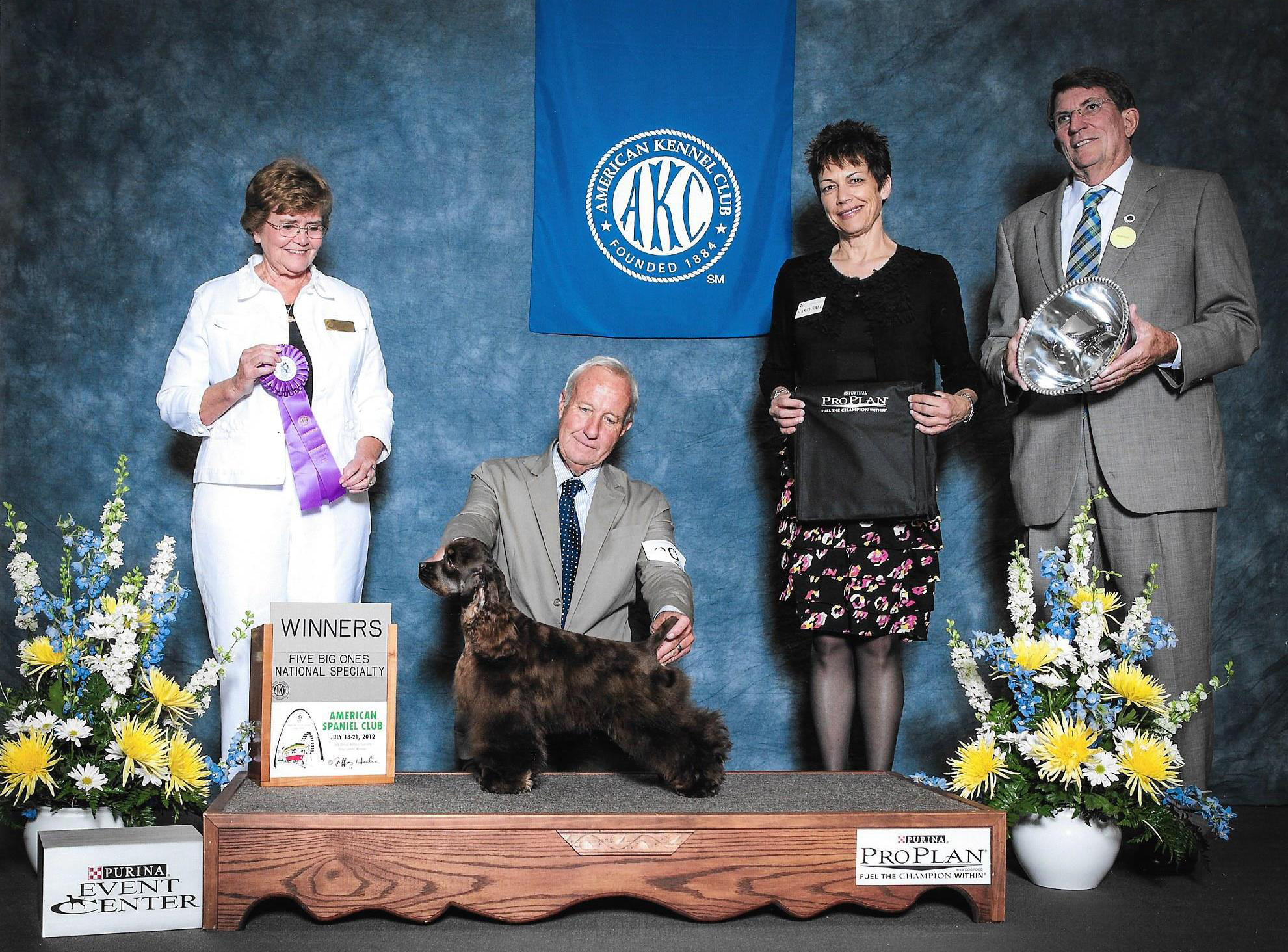 The judges and the dog world fancy have always been supportive of Striker, and also of his offspring. Striker's contributions to the breed have continued long past his show career, as he is currently the sire of 38 Champions. Ten of these offspring have obtained their Grand Championships which have included Bronze, Silver and Gold status.  Click here for his pedigree!

Striker's Amazing son, GCHG CH. Xotica N Bib N Tux One Shining Moment (Click here!), is currently ranked as the Number One Black Cocker, and Number 8 Sporting Dog. He is owned by Beverly Warren, and is being Specialed by Mike & Linda Pitts.

Carolee Douglas and I feel Extremely Blessed to own this Amazing Dog.

Striker was Exclusively Handled throughout his career, by Mike & Linda Pitts. 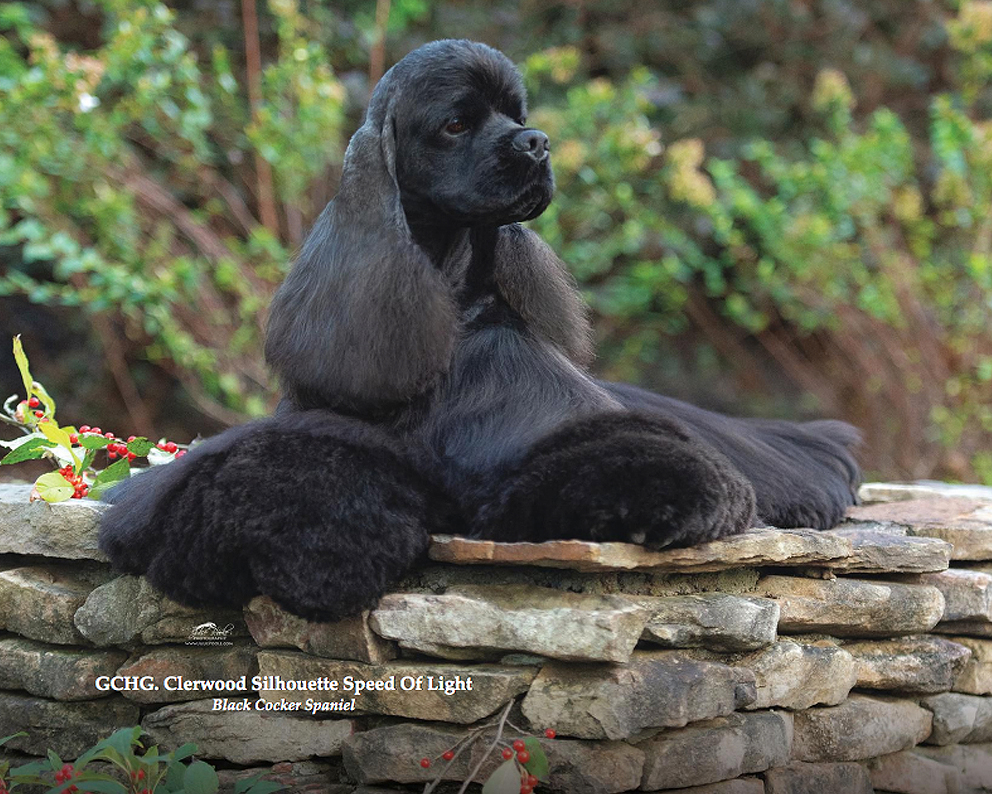 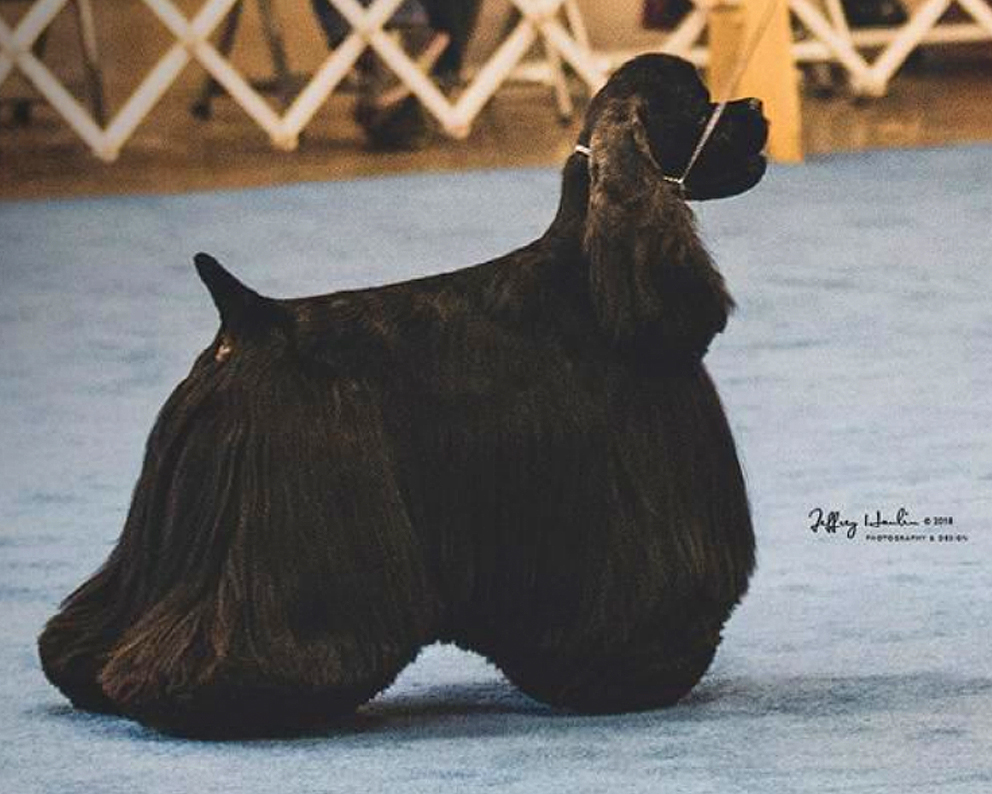 Grant showed great promise as a puppy, as evidenced by his National Specialty Best In Futurity win. Even as a puppy, we felt he had something special, and we are thrilled he lived up to our expectations. Grant is sired by Ch. Sweetheart’s Space Jam, a winner of the Sporting Group Showdog of the Year for 1999. His dam, Ch. Somerset’s Sweeten the Pot, co-owned with Laurie Ferland, was also a National Specialty Futurity winner.  In addition to having a prized pedigree, we have already seen his contribution as a sire. 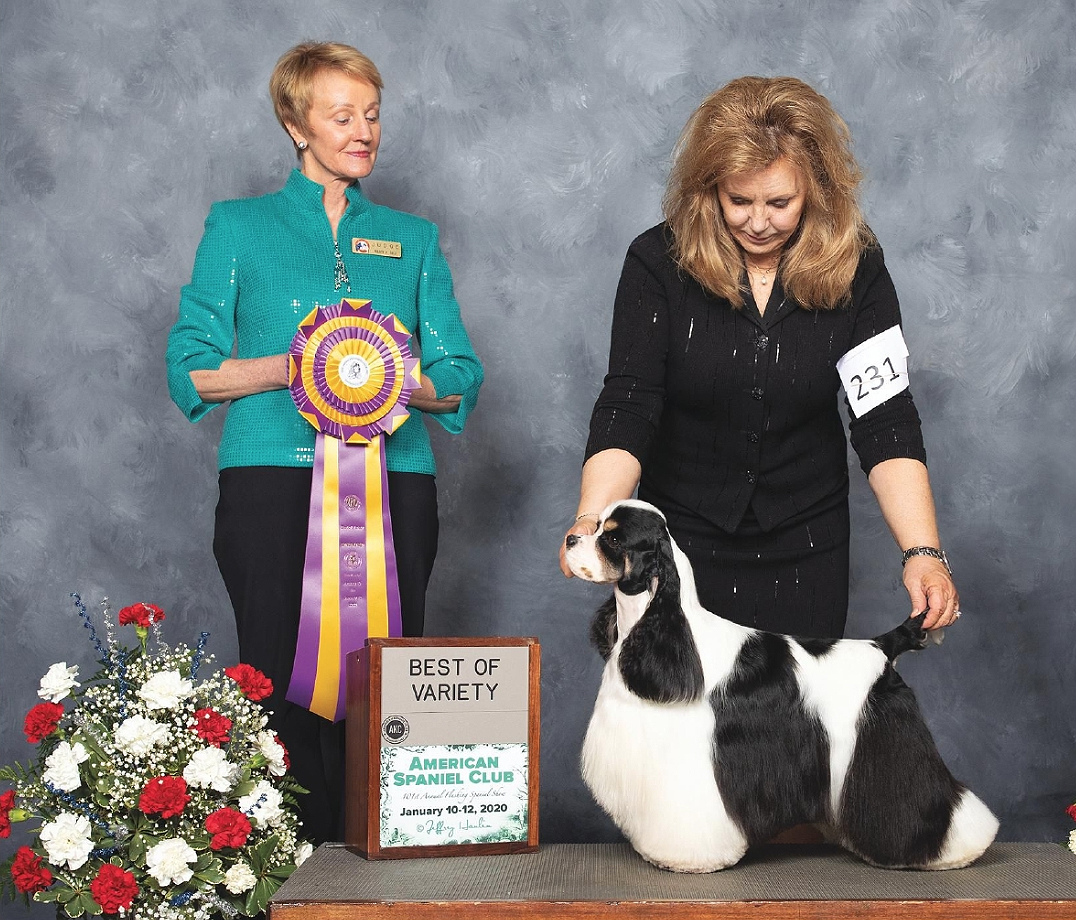 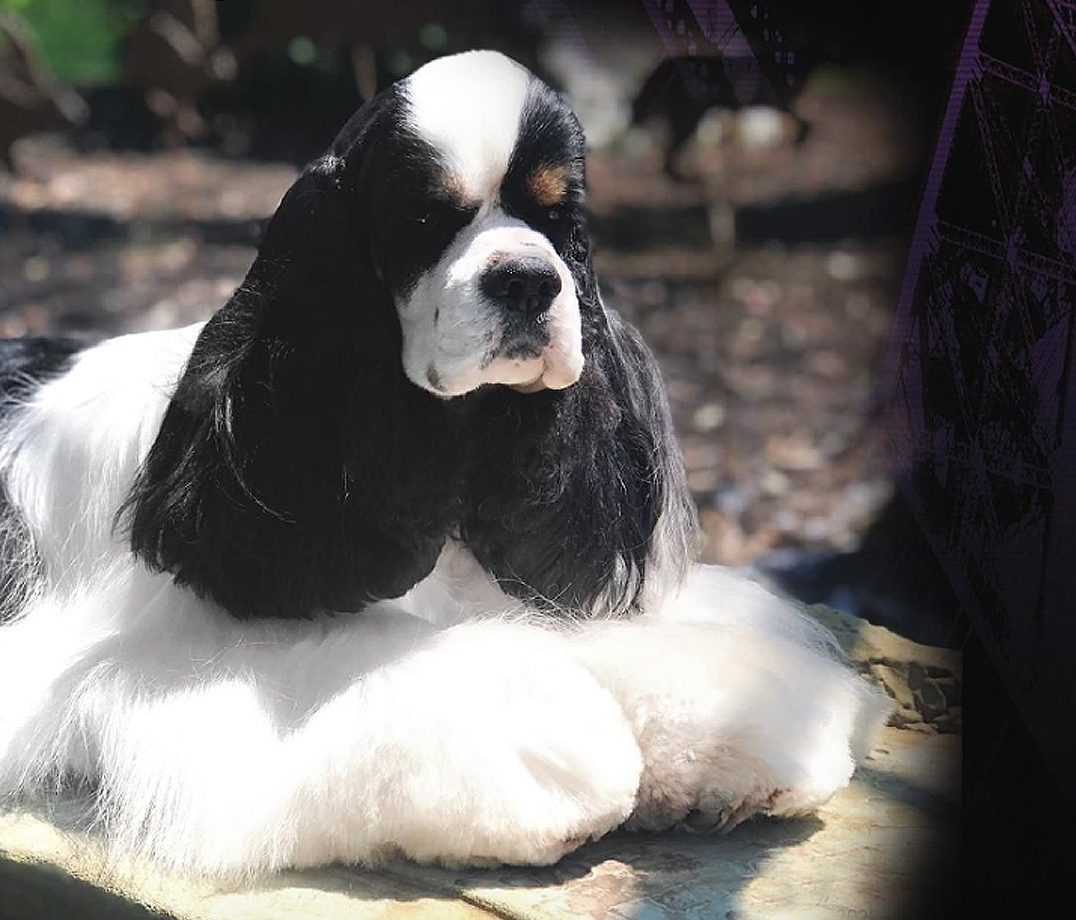 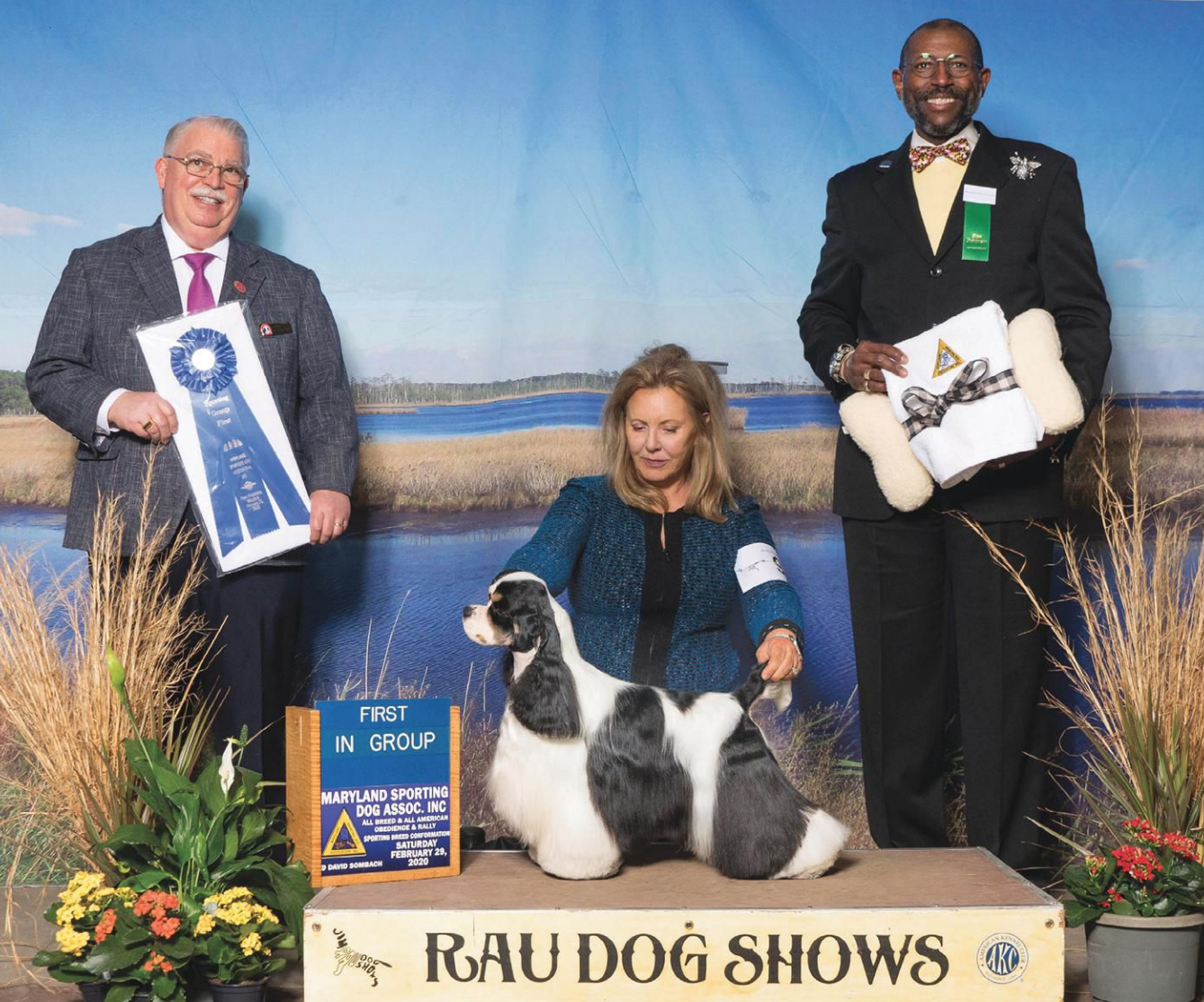 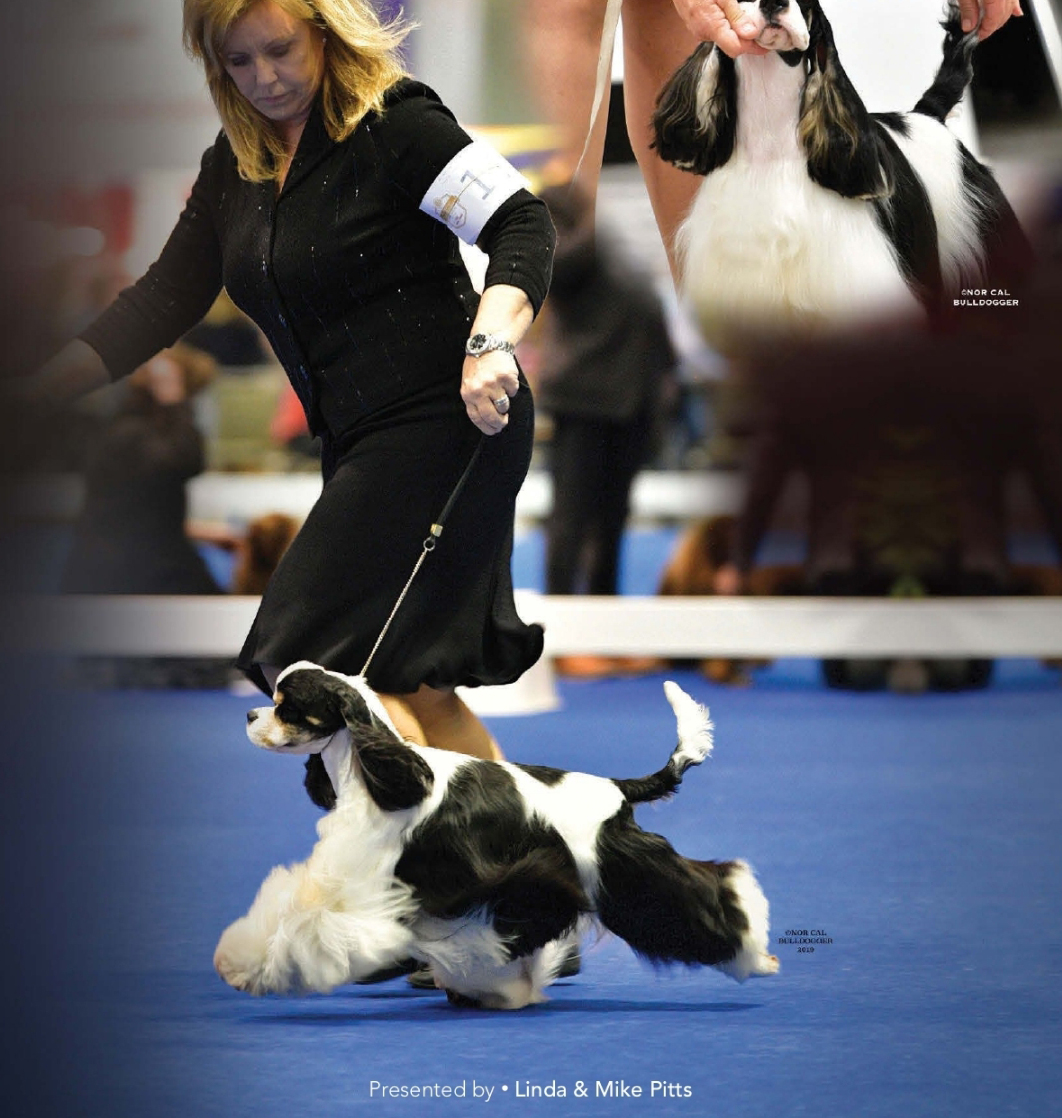 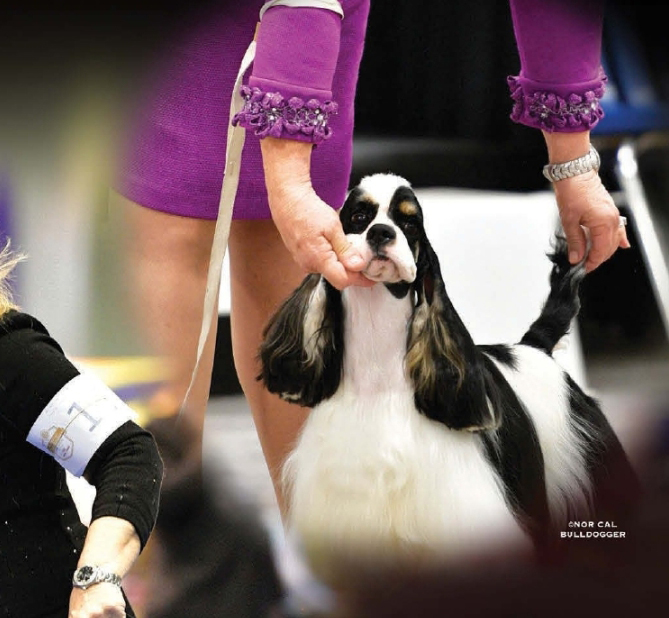 GCH. VERY VIGIE NOBODY IS PERFECT

I am proud to be a co-owner of this amazing dog. 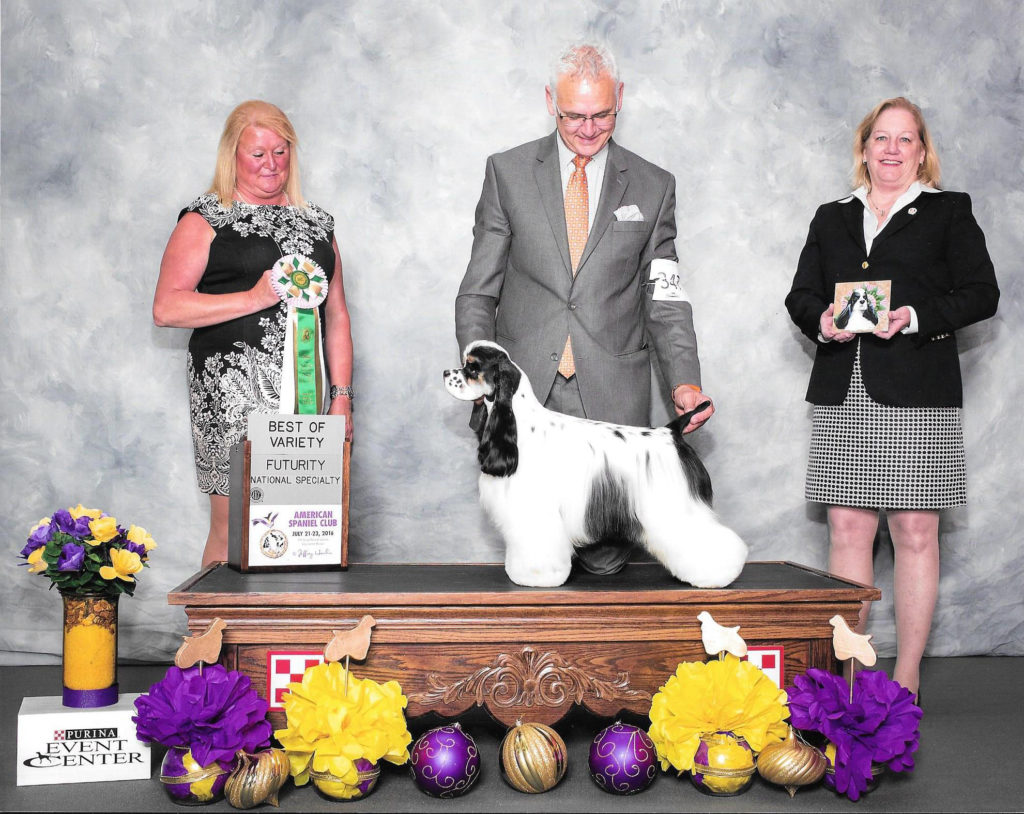 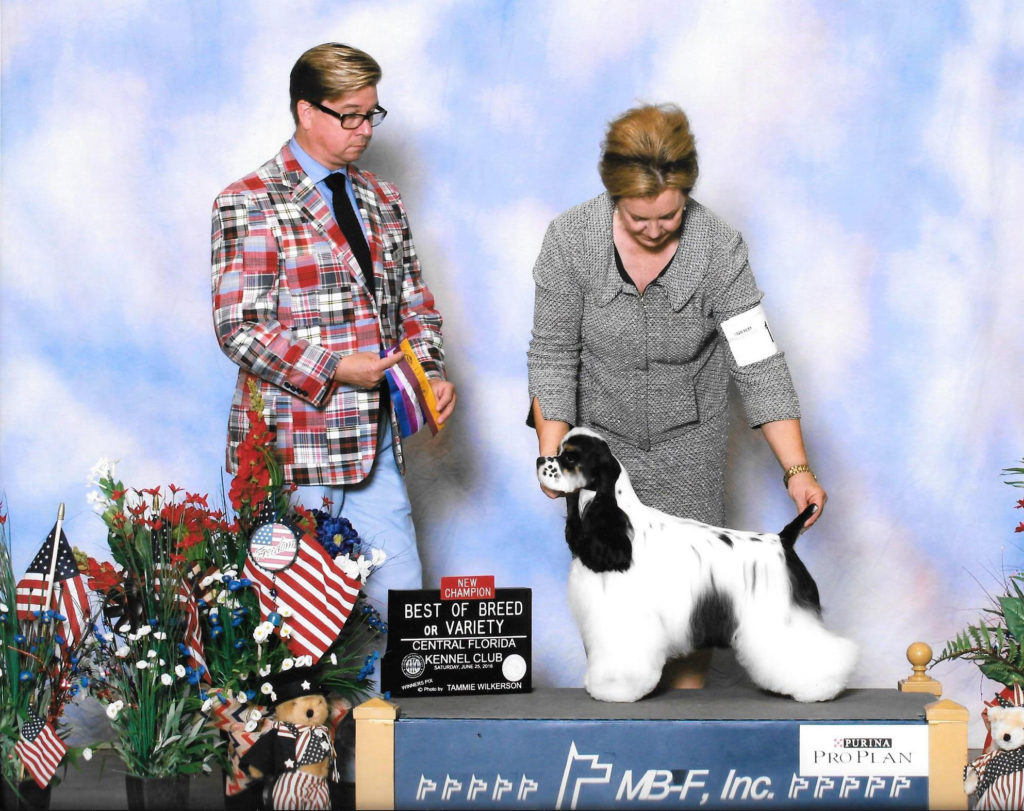 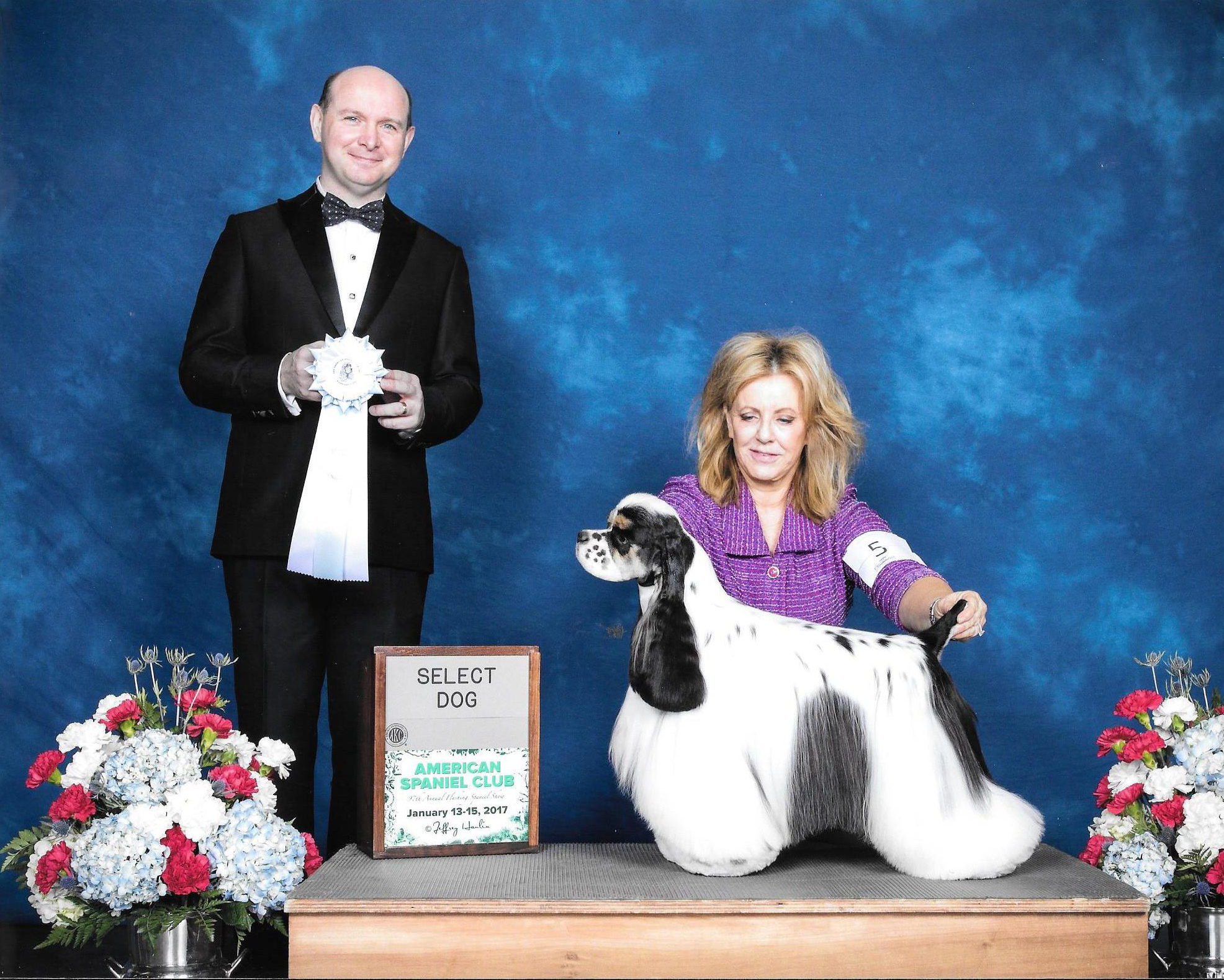 Colt is a Handsome Tri Color Dog with good confirmation and a fun, loving temperament.

He won Best Of Variety at our ASC National in July of 2016, and Select Dog at the American Spaniel Club Flushing Spaniel Show in January 2017.

He has been available at Limited Stud, and has only been bred once. He is proud of his Beautiful daughter CH. Rubic's Midnight Star "Stella". 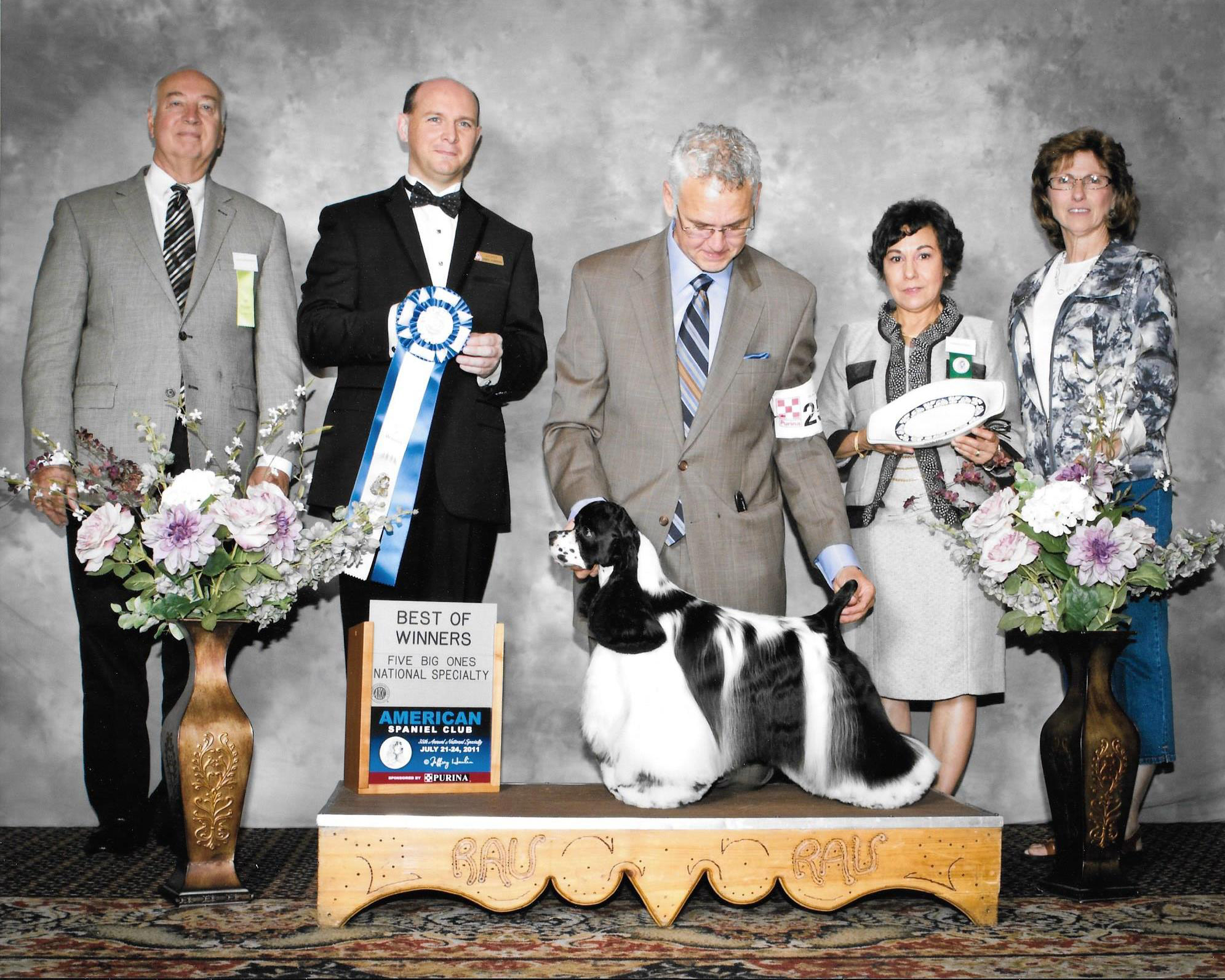 Lewis was born in June of 2010 in the UK. He was purchased from my friends Jason Lynn, and Michael Gadsby, and arrived in the US in November to be shown by Mike & Linda Pitts.

Lewis was a Darling puppy with a Wonderful Temperament, Good Confirmation and a Will to please. We were all very excited to get him started in the Show Ring.

At our 2011 ASC Flushing Spaniel Club Show, Lewis went Winners and Best of Winners from the 6-9 puppy class for a 5 point Major.

Six months later, at our ASC National Specialty, Lewis also went Winner's Dog and Best of Winners for another 5 point major. Needless to say, he finished his Championship very quickly.

Lewis was co-owned with Bob & Doris Rubick and lived with them in Maryland. Lewis produced 5 Champion Offspring including his son Colt, and daughter's Shotzy & Sparkle. Sadly, Lewis died in July of 2019 from kidney cancer. 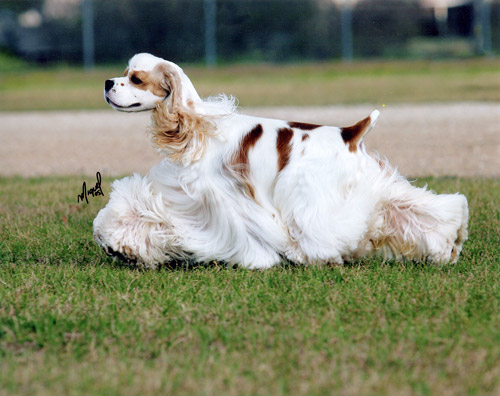 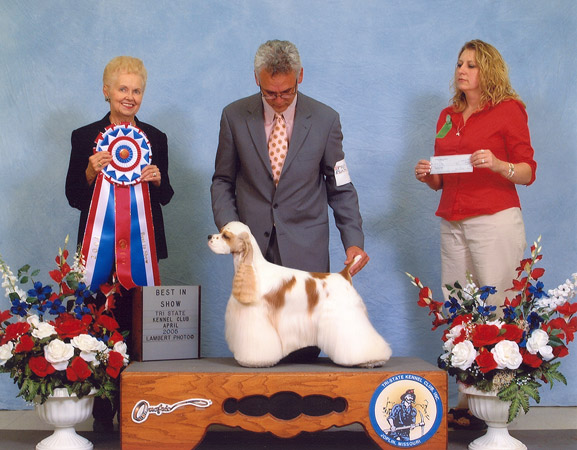 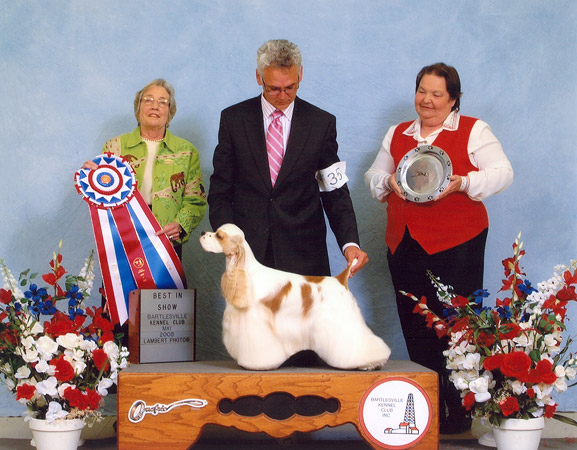 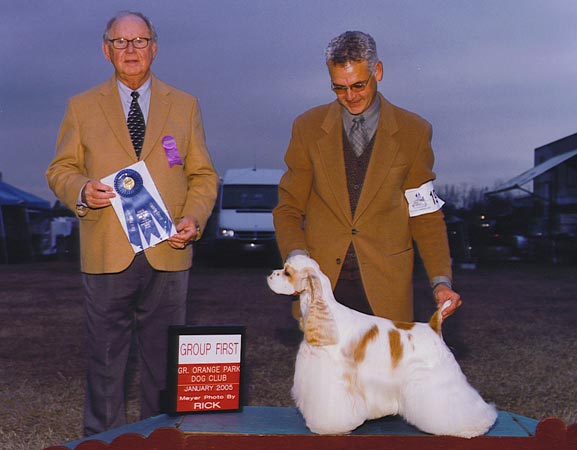 Sadly, Austin died on June 13, 2015. He is gone from our lives but will live on in our hearts forever.

Be sure to head over to see our girls.