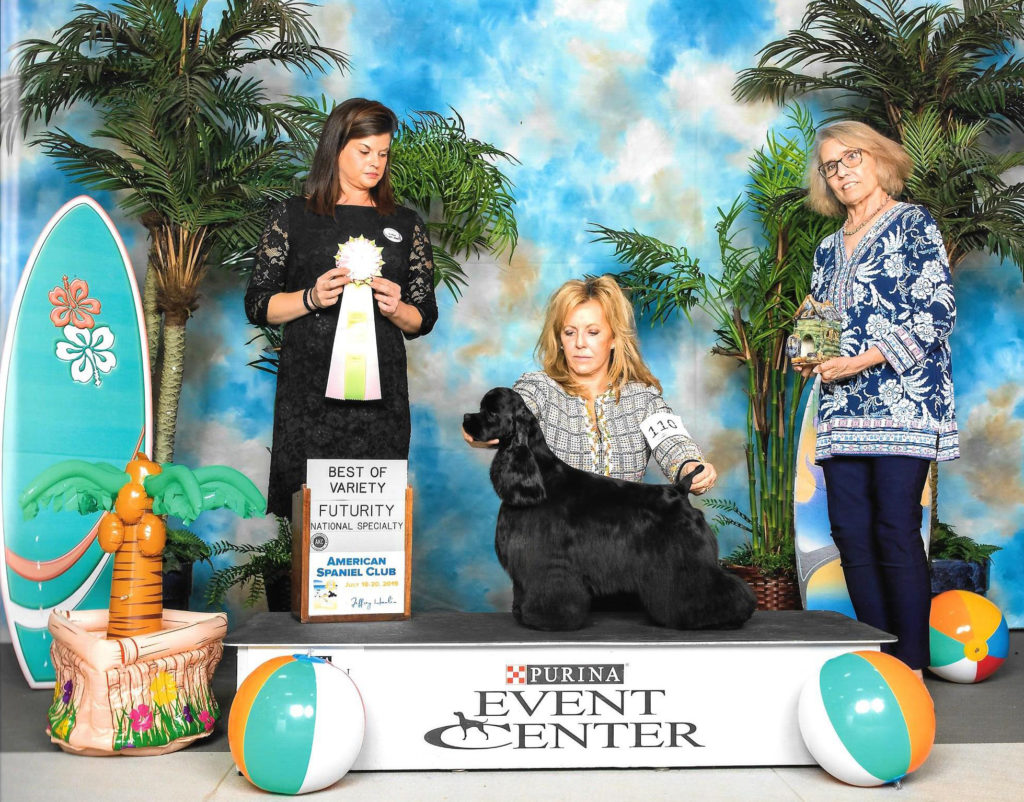 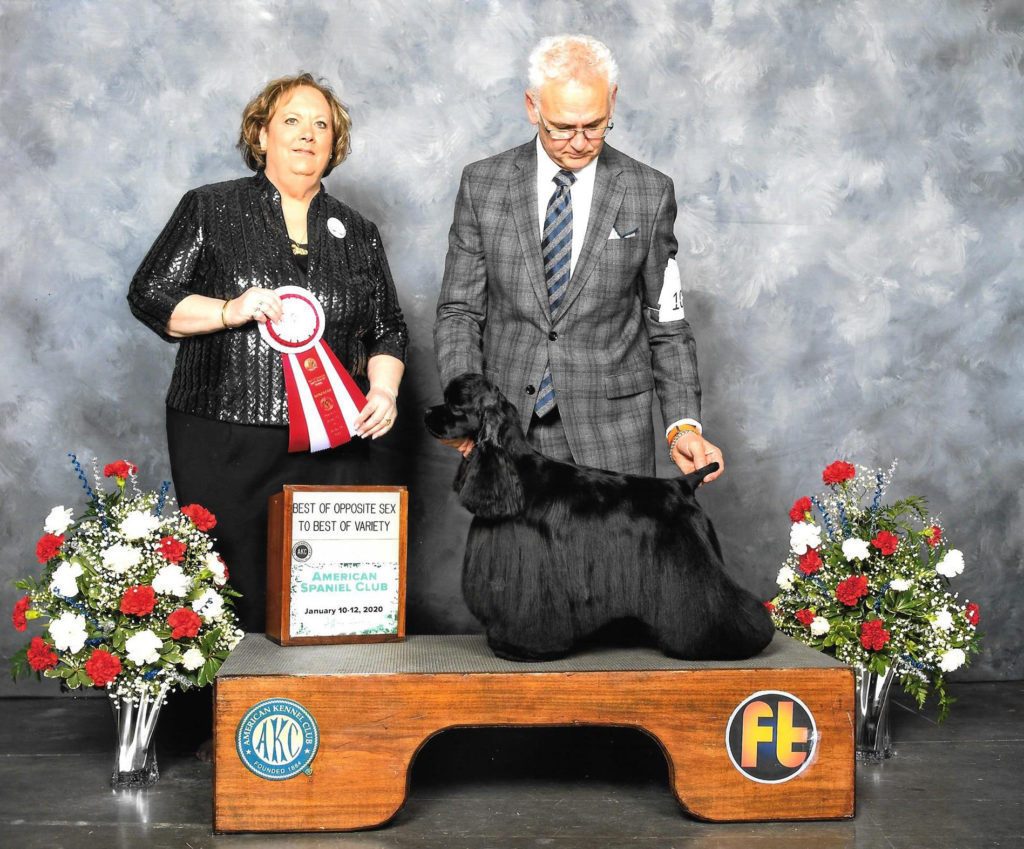 Charm was a real standout as a puppy. Her dam is Lucky, our Striker daughter, and her sire is Grant. She was co-bred with Lindy Bennett.

With all majors, Charm is only four points away from her Grand Championship. She won the Black Futurity Variety at our ASC National in 2019, and was Best of Opposite Sex to Best of Variety at ASC's Flushing Spaniel Club Show in January 2020.

Charm is owned by Linda Moore, Laurie Foley, Linda Pitts and me. We are all very anxious to see her back in the Show Ring soon. 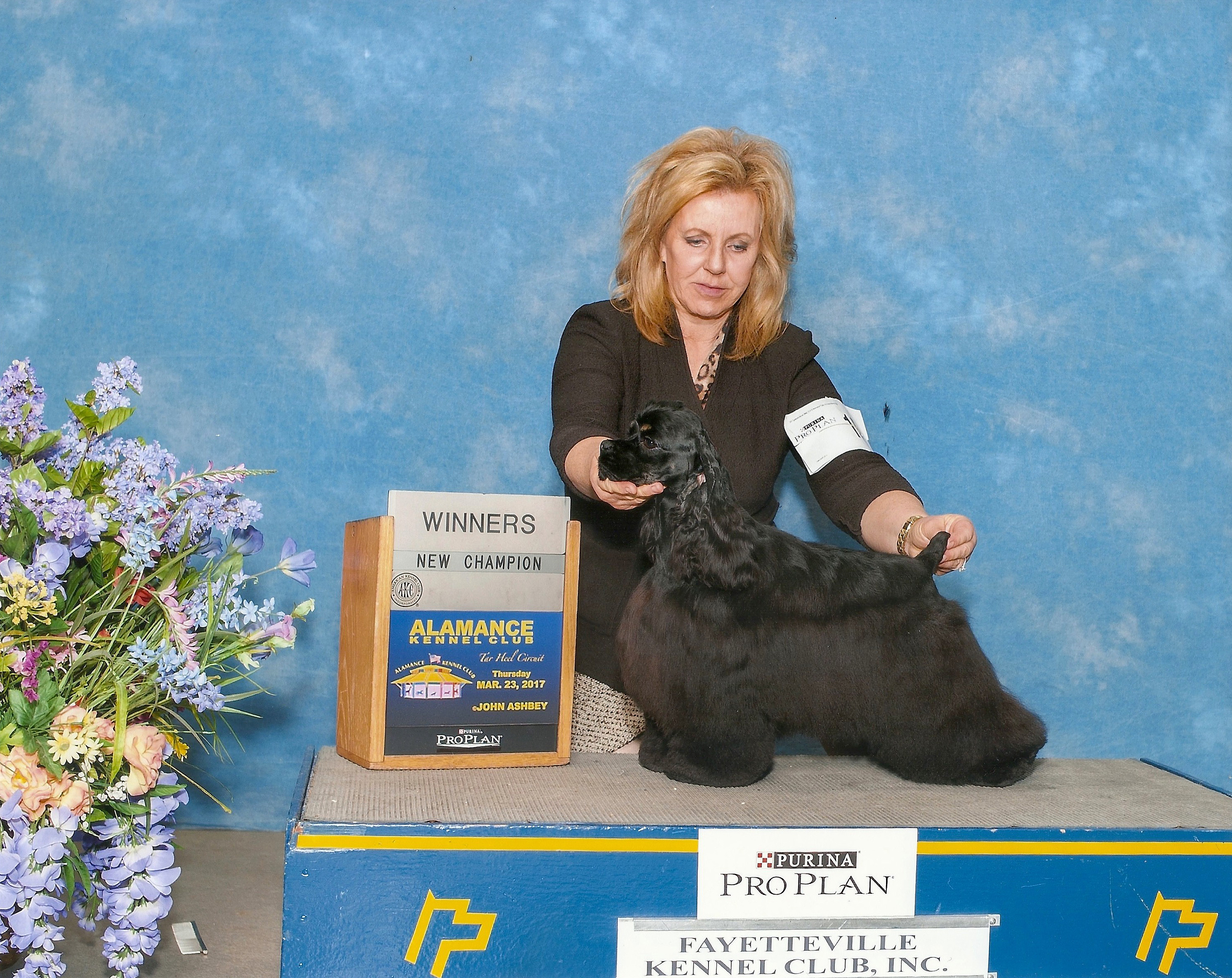 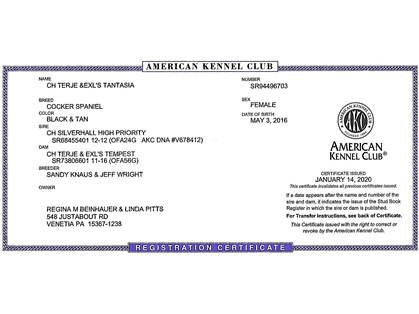 CH Terje & Exl's Tantasia was purchased as a 6-9 month old puppy. At that time, she had won a large class of 9 at our ASC Flushing Spaniel Club Show. I was looking for something that could be bred to Striker or Grant in the future, and she had a wonderful attitude, temperament and pedigree.

Jolene finished her Championship quickly and has passed all of her Health Testing. She is co-owned with Linda Pitts.

We are Very Pleased to Announce that Jolene and Grant have a litter of 4 puppies. We are excited to watch these "kids" grow up and hopefully make their parents proud. 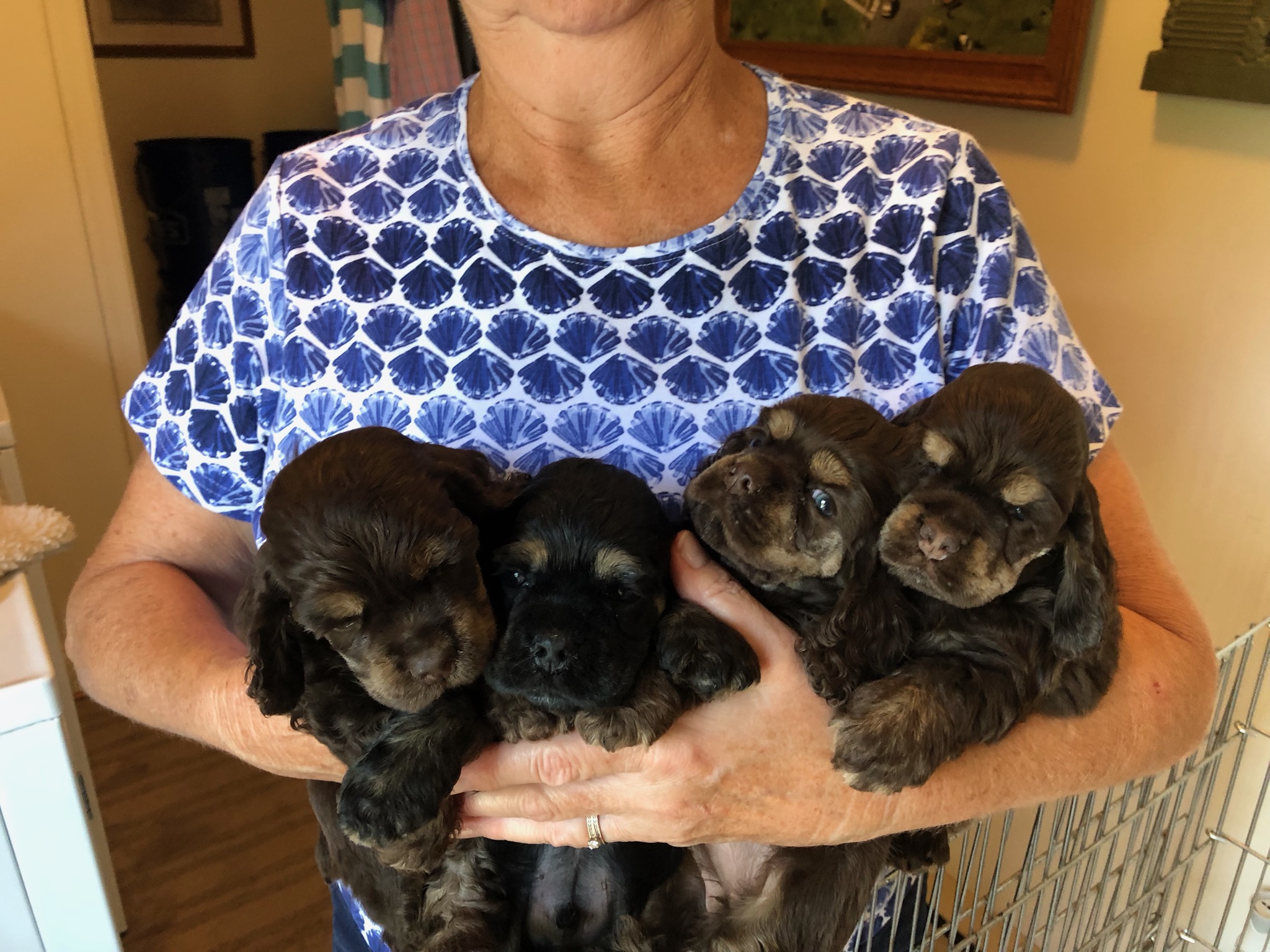 CH. Silverhall Saturday Matinee is a darling Striker daughter, that was bred by Bonnie & Wilson Pike. She won the 6-9 puppy class at our 2017 ASC National Specialty, and then went Reserve Winners Bitch.

She finished her Championship quickly, and has passed all of her Health Testing to date with flying colors.

Maddie has had one litter too, and all of the puppies are living in loving pet homes. She will be bred again in the near future.

Maddie lives and is co-owned with my friends Bob & Doris Rubeck. 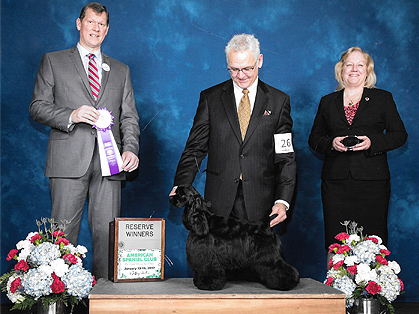 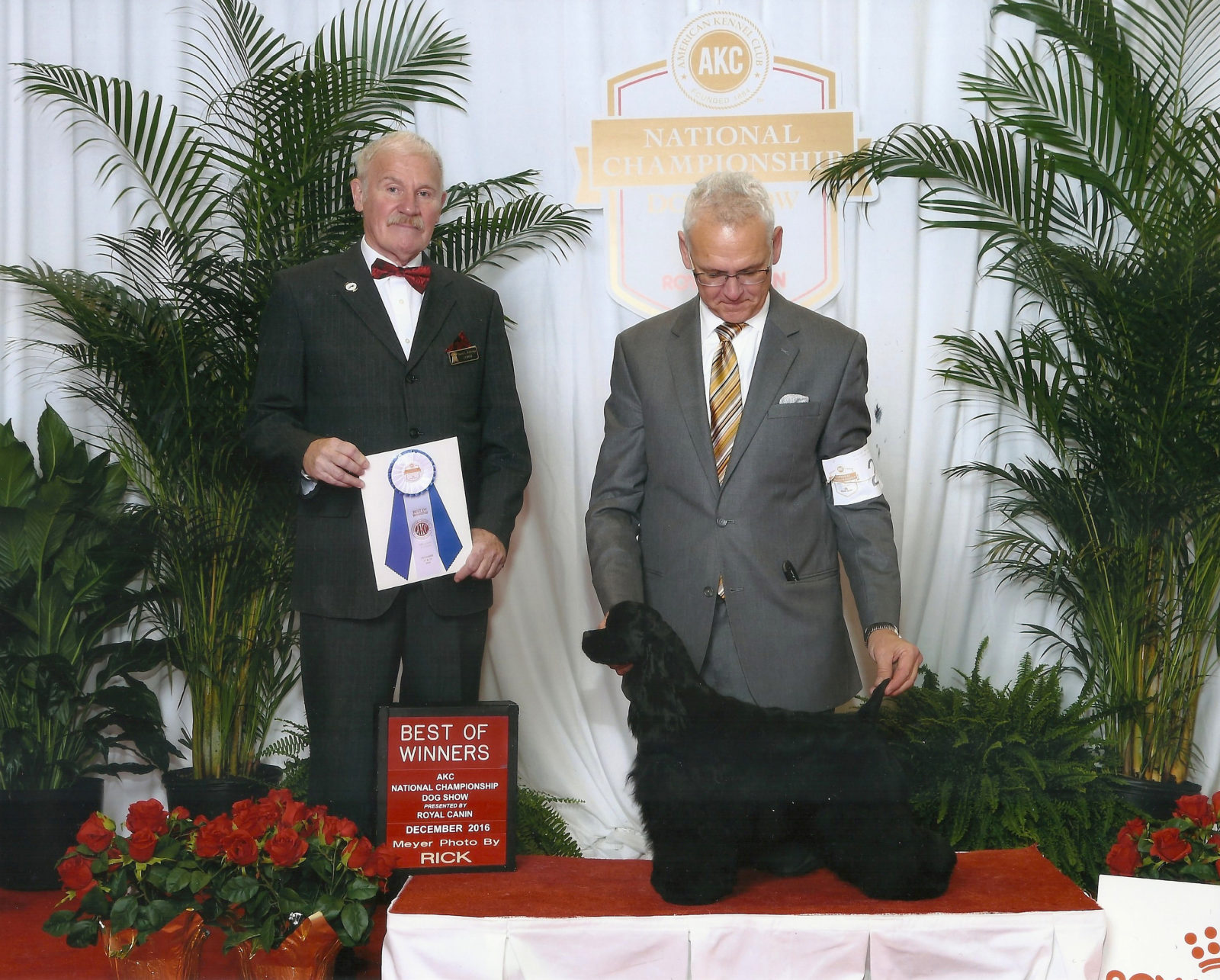 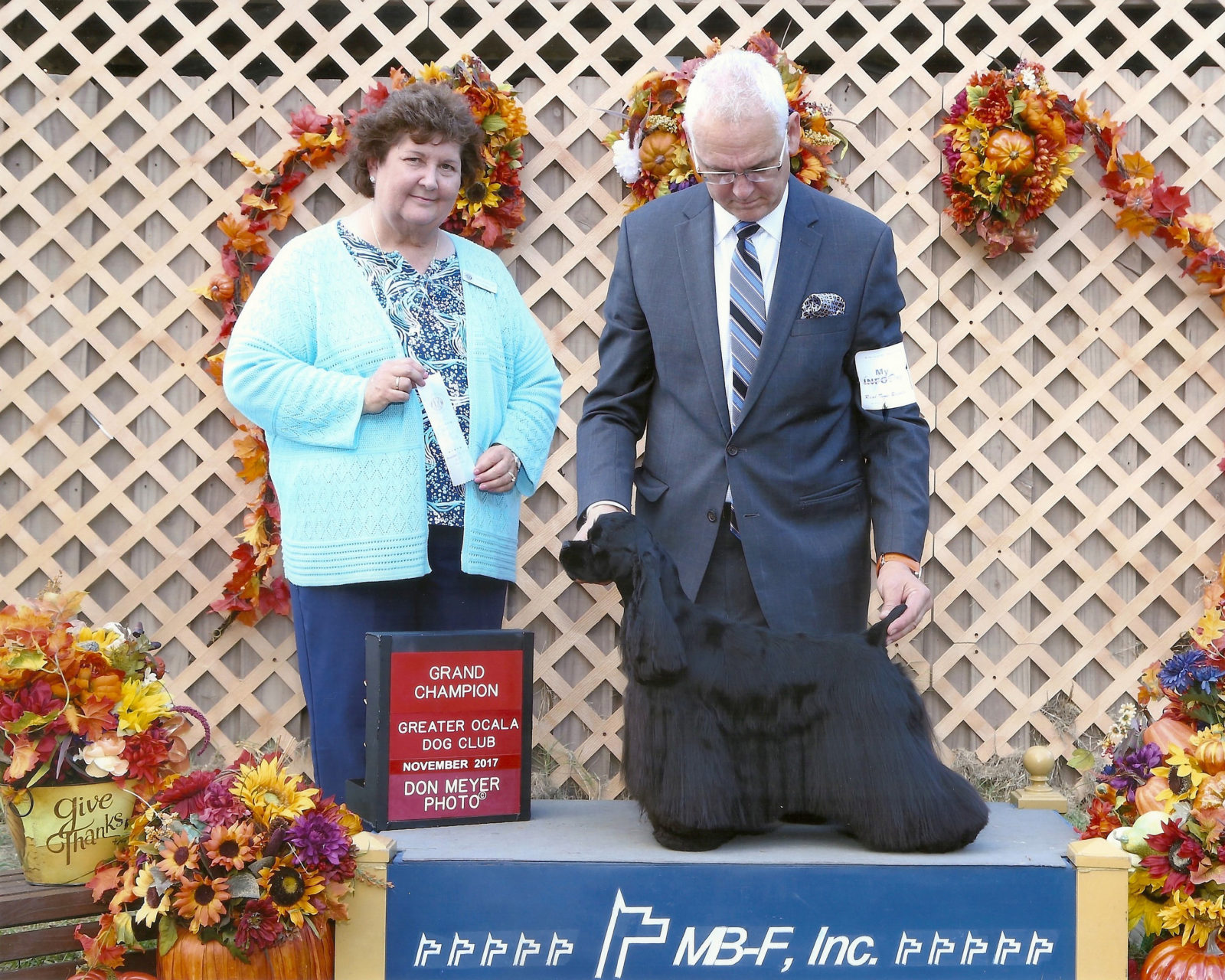 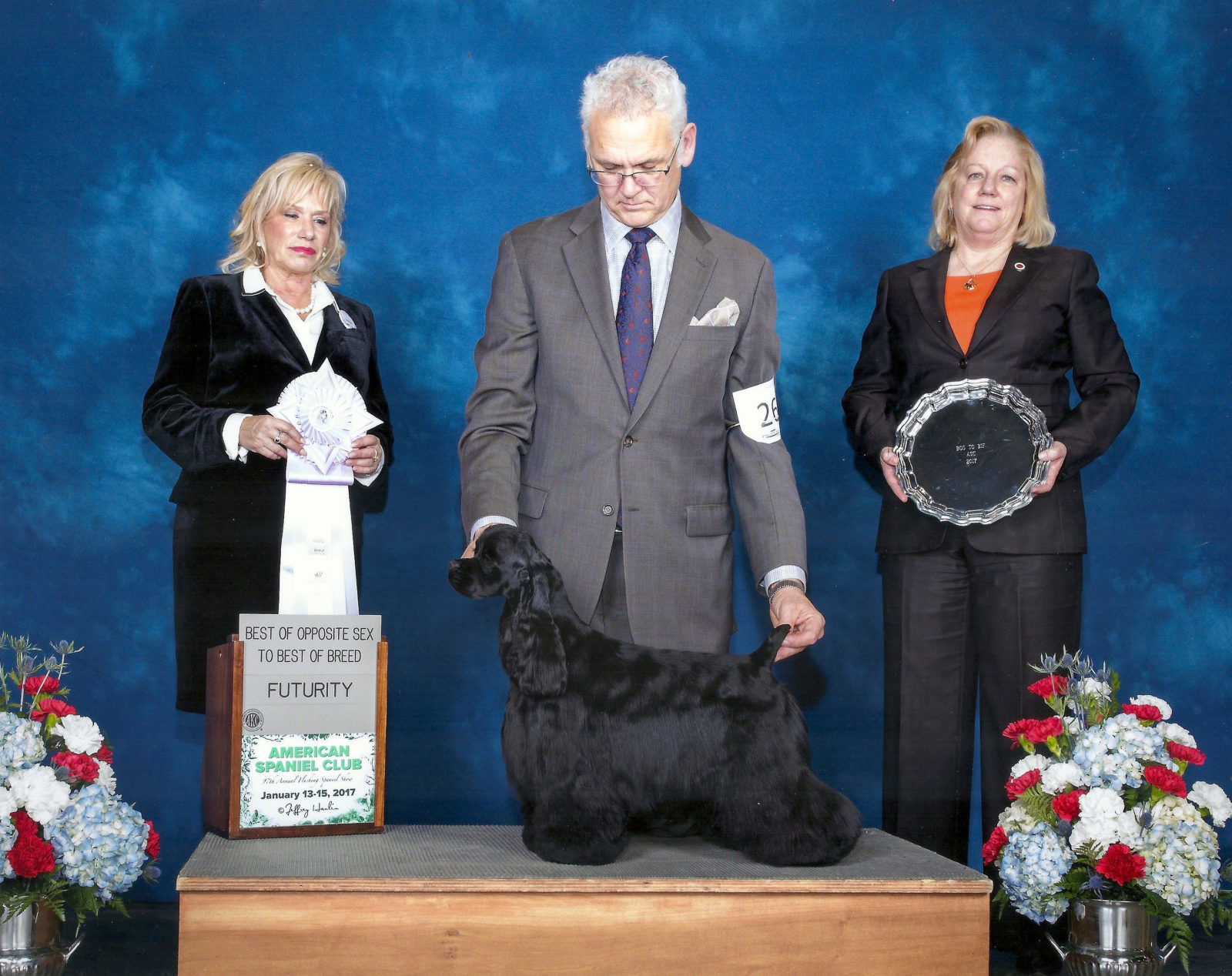 Lucky was co-bred with my friend Lindy Bennett She was a stunning puppy, winning her 9-12 Futurity Class & going on to win Reserve Winner's Bitch. Lucky achieved her Championship and Grand Championship very quickly.

After completing her Health Testing, Lucky was bred to GCHP Clerwood Silhouette Speed Of Light "Grant" and then to GCH Toybox Double Down. She is the Dam of 3 Grand Champions to date. Her daughter CH Silhouette N Normandy's Lucky Strike "Charm" has her own page. Look for photos and information on this beautiful girl there.

Lucky lives in my home with me, my husband Rick and her 13 year old buddy Rosie. They are our constant companions. 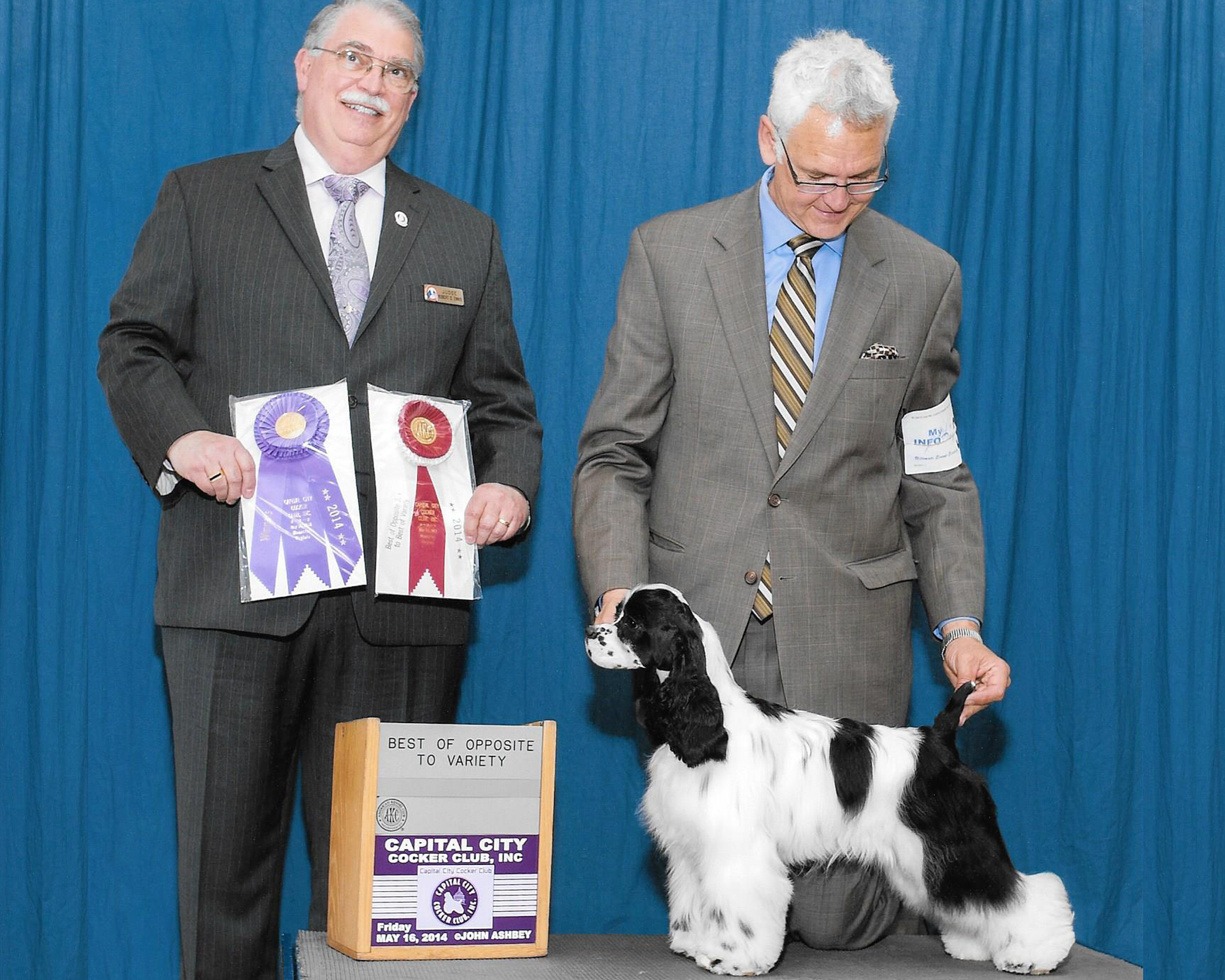 Mila was co-bred by Harriet Kamps and me. She finished her Championship quickly and has passed all of her Health Testing for the past 6 years. She is co-owned with Linda Pitts and Jackie Cavallin.

We are pleased to announce that Mila and CH. Very Vigie Nobody Is Perfect "Pierre" have a litter of 6 puppies.

We are looking forward to watching these babies grow up to make wonderful pets and to also follow in their parents footsteps in the Show Ring.

Mila is the Currently the Proud Dam of 5 Champions Offspring. 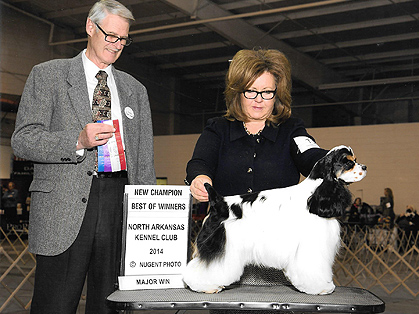 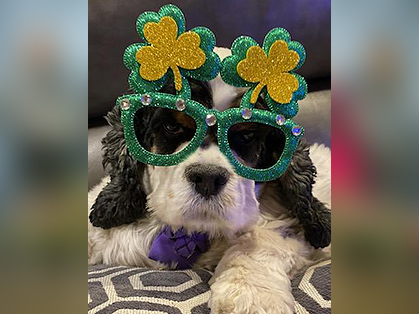 Twist and Mila were full littermates. I did one breeding with Twist, and kept her daughter Karlie to possibly breed in the future.

A very dear friend of mine, Marie, had lost her older Tri-Color cocker, and was looking for another dog to love. We are always happy to be able to place some of our girls in loving homes if and when the right opportunity arrives.

We are Thrilled that Twist is now a loving pet and has her parents very spoiled. Her best friends, Piper & Skylar are also dogs that we bred. 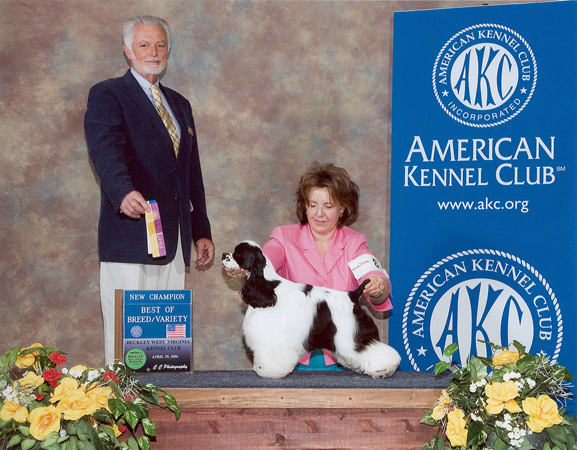 Stevie was co-bred by Harriet and me. She and her sister Heart were 7 generations down from CH. Mirwin's Merry Miss who produced CH. Kamps' Kountry Kiss. Kiss was Harriet's top producer with 24 Champion Offspring.

Stevie was whelped in my home, and needless to say, she and her sister Heart held a very special place in our home and the hearts of all of my family.

She and Heart spent a short time away from us while they got their Championships handled by Mike and Linda Pitts.

Sadly, we lost Stevie in August of 2019, at the age of 14 1/2. Her daughter, Susie, now 12, Granddaughter's Mila & Twist, and her Great Granddaughter Carrie will continue her legacy. 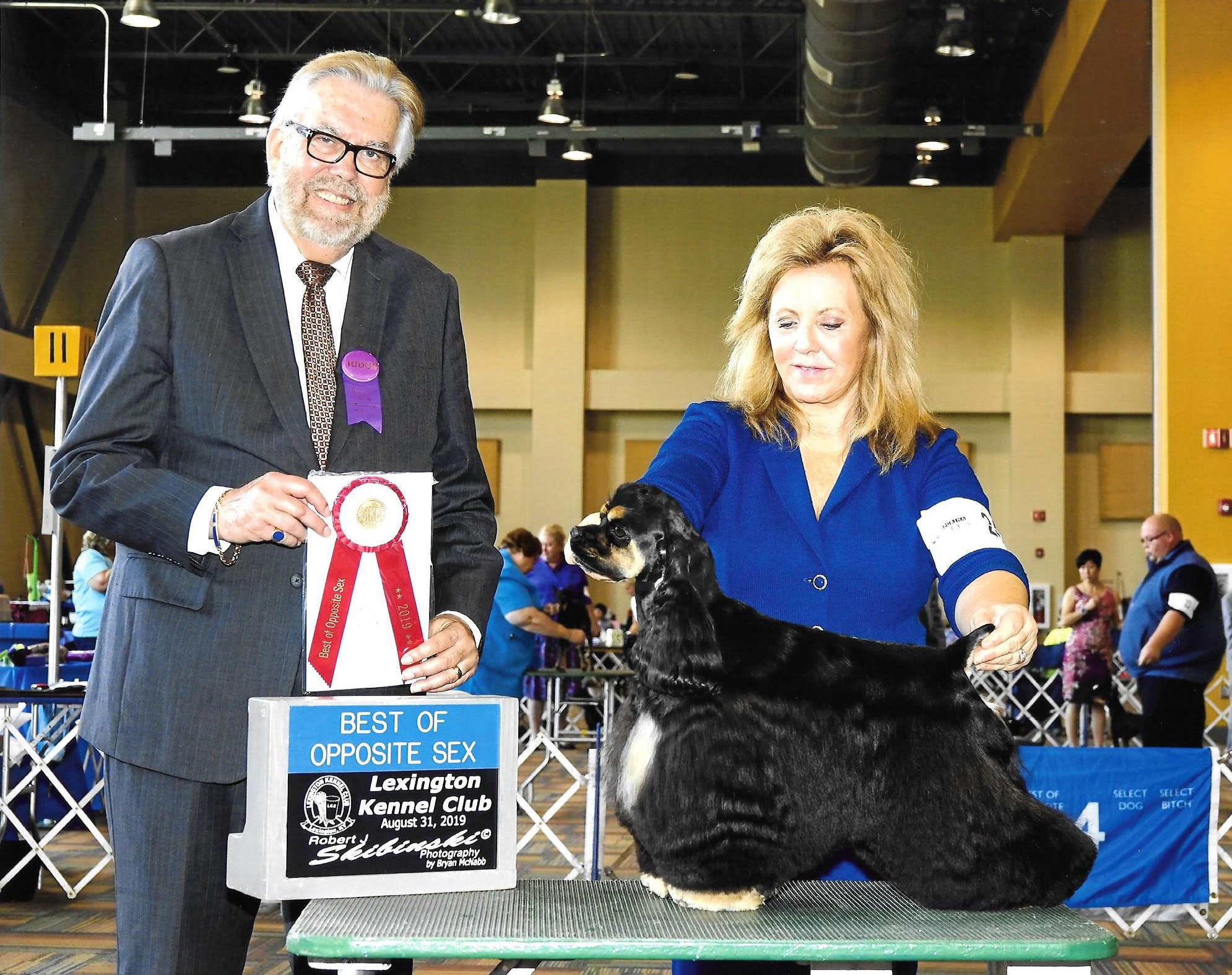 Dolly is a Beautiful marked Black/Tan Striker daughter. Her dam is CH. Lydgate Let Her Fly bred by Deb Knight who has been breeding cockers since 1984.

Dolly was bred my friend and Dog Show Judge, Jon Jeffrey Breckenridge-Mitchell and his partner. Dolly was raised and shown by Jon. He put all of her points on her with the exception of her last major, and her Grand Championship.

I had seen photos of Dolly that Jon had sent from time to time, but had not seen her in action until our ASC National in July of 2019. That day in the ring, her movement was Flawless, and Jon did an Amazing job of showing her.

He later approached me and told me that he had decided to sell her as they wanted to concentrate on their other breed which is Cardigan Welsh Corgis. Needless to say, I was thrilled to have the opportunity to purchase Dolly.

Dolly is co-owned with Linda Pitts. She and Mike quickly put Dolly's last major on her, and from there, she quickly obtained her Grand Championship. Dolly has an Amazing Temperament, and loves to show. She has also been shown in Junior's Competition by Linda & Mike's daughter Savannah.

Dolly will be bred after she completes her two year old testing. Linda, Mike and I are looking forward to seeing her babies show in the future. She will then come home to live with me, enjoy being a couch potato, and possibly do some therapy work.

Shotzy is our Very Pretty Red/White littermate to Colt. Her Sire was Lewis, and her dam is CH. Kamps'-Normandy N Rubic's Silhouette. She was bred by Robert Rubeck, Linda Pitts, Harriet Kamps and me.

She won a 5 point major from the 6-9 puppy class at the Carolina Cocker Spaniel Club Shows which really helped to fast track her through her Championship.

To date, Shotzy has only been bred once, and she produced a very pretty tri-color puppy called Fanny.

Bob, Linda and I are looking forward to breeding Shotzy to Pierre in the Fall. 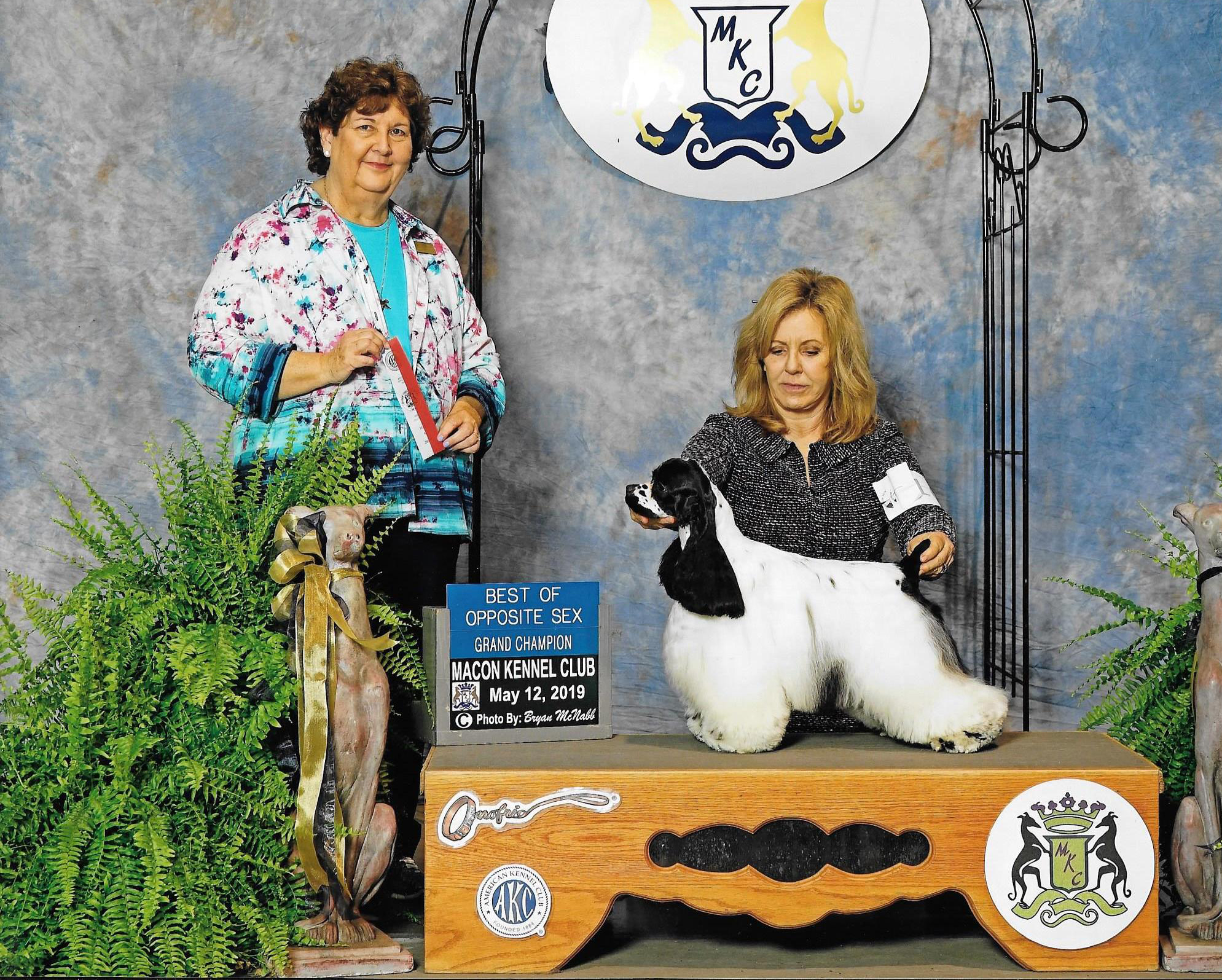 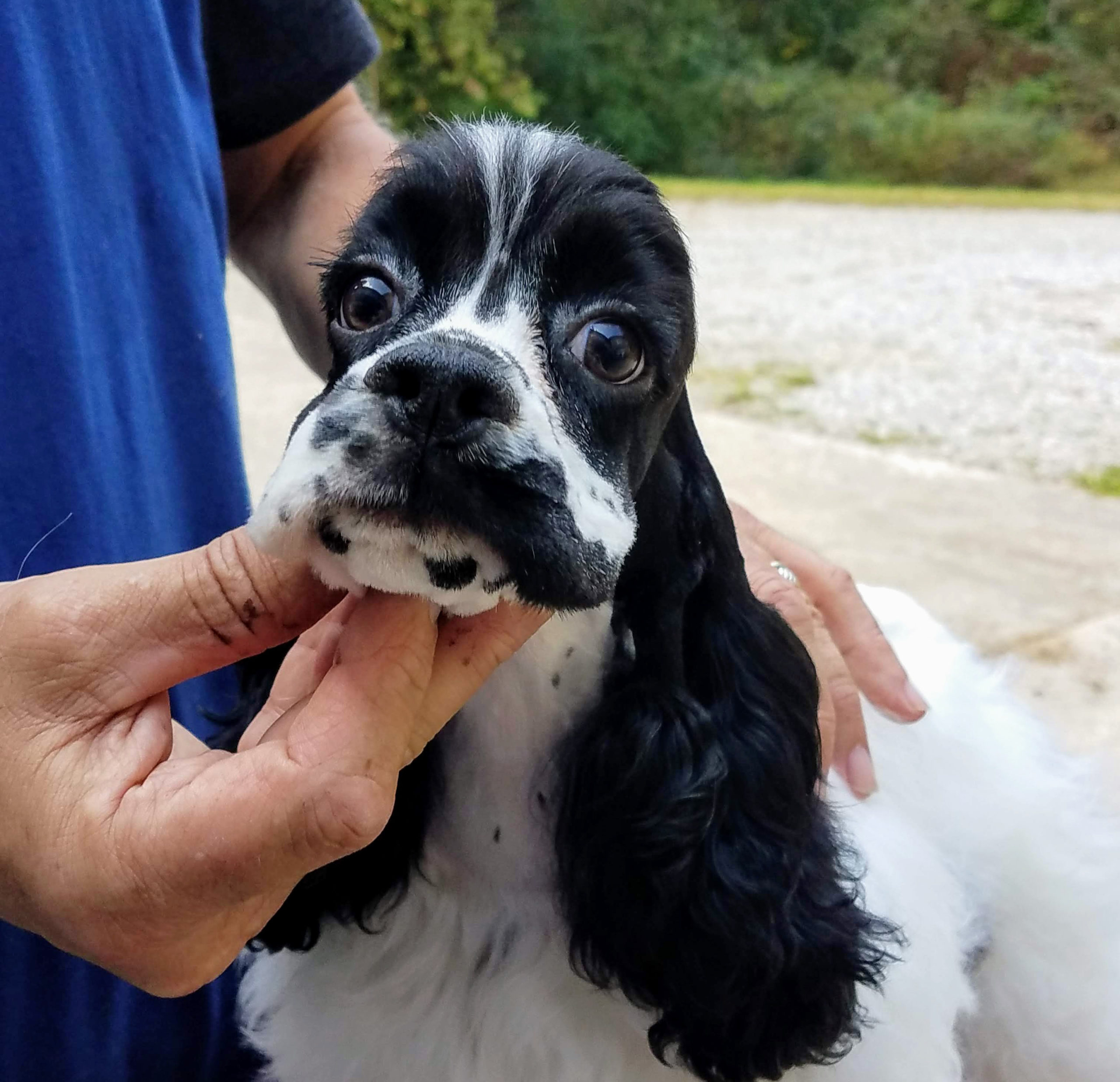 Carrie, the daughter of Mila, was a charming puppy that has grown into a Beautiful Girl. Her sire is GCH CH. PBJ'S ROCK ON, and she is the Great Granddaughter of our Beloved Stevie. She is 8 generations down from CH. Kamps' Kountry Kiss. All of these girls have had sound, loving temperaments and their health testing completed.

Carrie was bred and is co-owned with Linda Pitts. We are looking forward to carrying on the lines that go back to some of Harriet's Amazing Dogs. 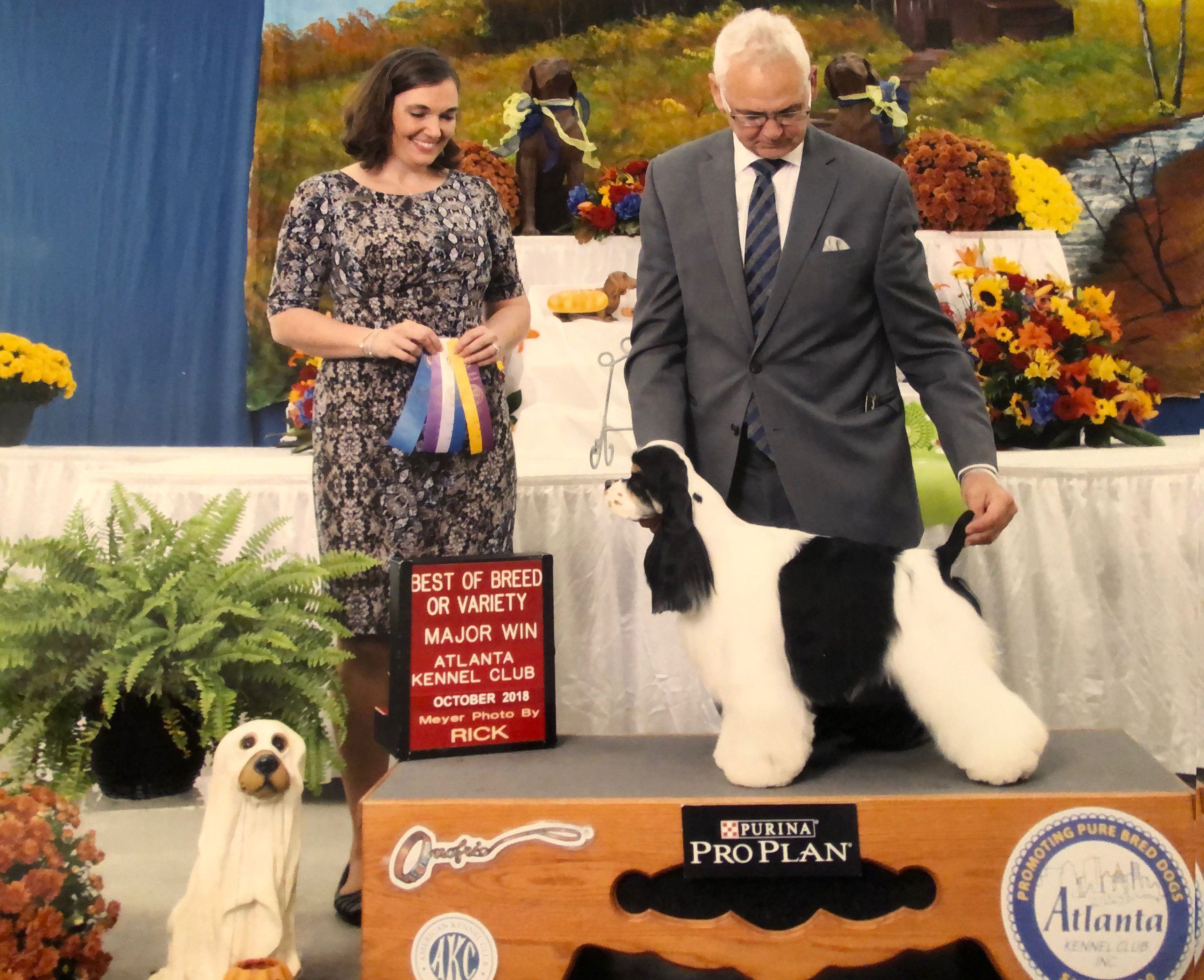 Stella was bred by Bob and Doris Rubeck. Her sire is our Colt, and her dam is Rubic's Della Rose.

Stella is a Very Pretty Girl with lots of attitude, and a Wonderful Temperament. She finished her Championship quickly, and is now in the process of getting her health testing done.

Linda Pitts and I are excited to be co-owners with Bob and Doris and we are looking forward to the opportunity to show some of her offspring in the future. 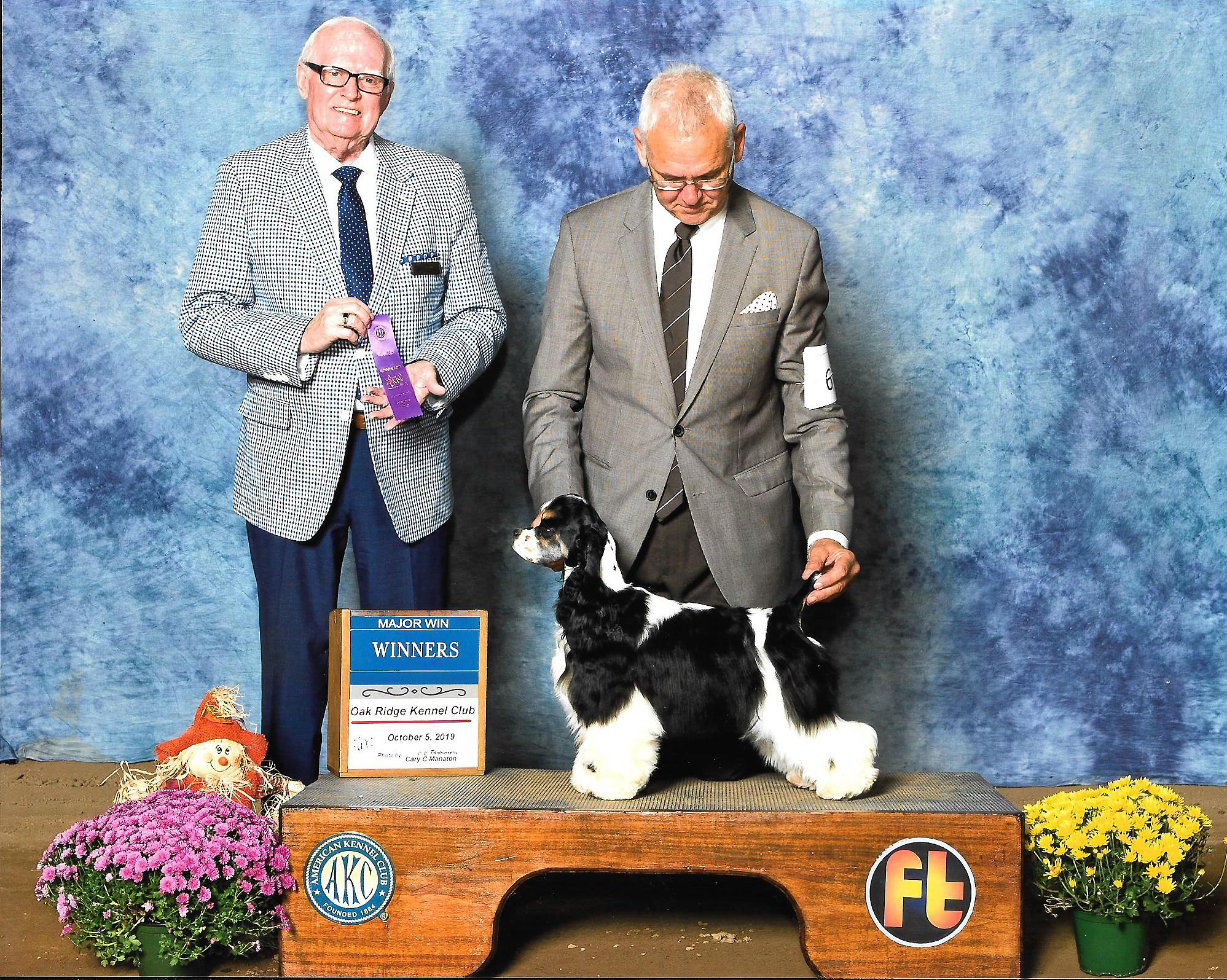 Fanny is our most current girl to finish her Championship. Her dam is Shotzy, and she is sired by CH. Duet's I M Night Visions.

She obtained her Championship from the puppy classes, with three major wins, and is a Very Pretty Marked Tri Color, with lots of Attitude and Sweetness.

Fanny was bred by Bob & Doris Rubeck, Linda Pitts, and me. Because she just turned a year in February, she has a while to wait for her testing to begin. Testing on all of our dogs begins after they turn two.

She is currently living with Bob & Doris, and we are all looking forward to being able to see her offspring in the future.   Click here to view her pedigree. 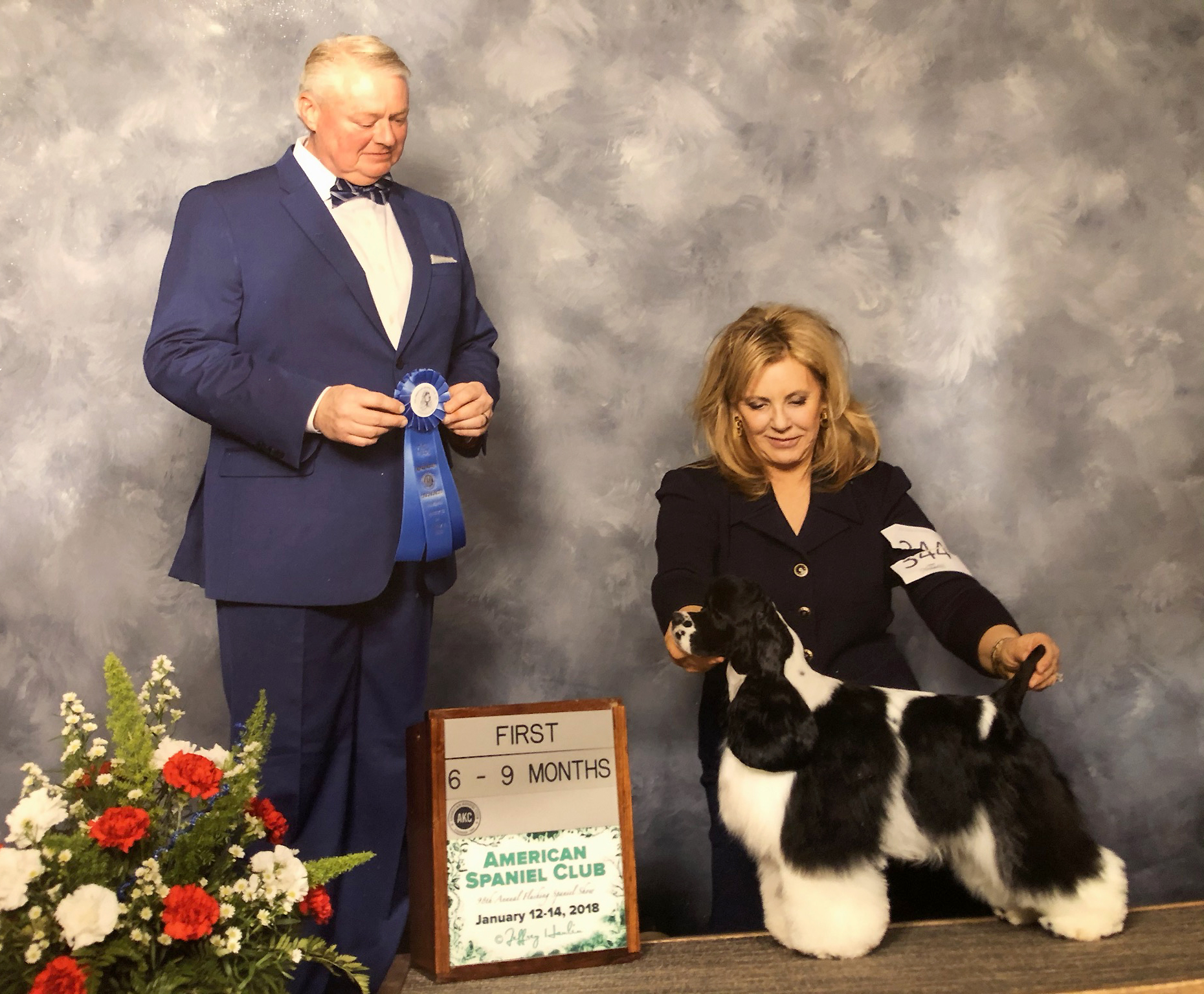 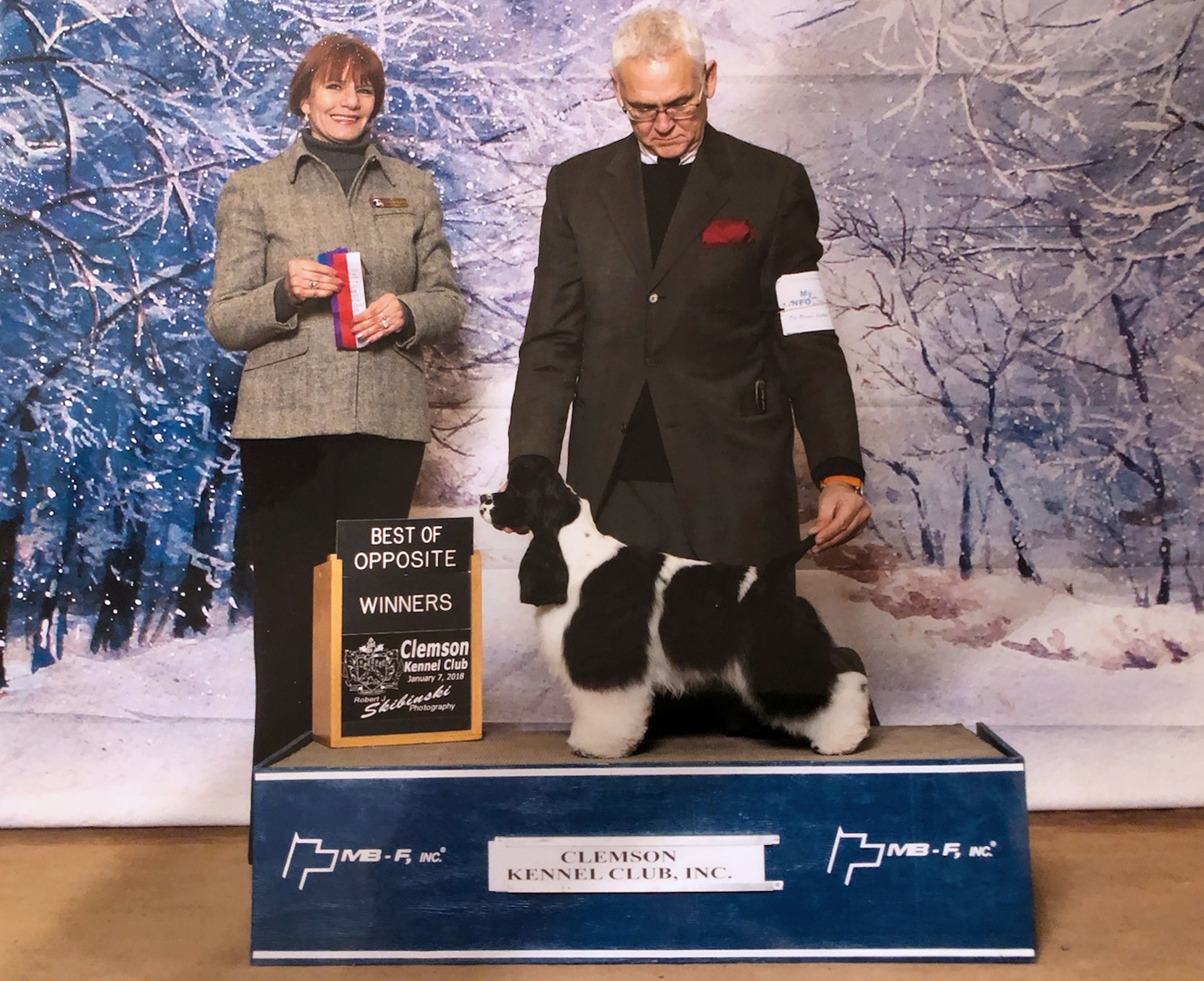 Sparkle was bred by Bob, Doris Rubeck and me. Her Sire was our Lewis, and her dam was Rubic's Della Rose. Della was sired by CH. Perje's Penthouse who was fondly known as Mikey. Mikey spent a large portion of his life living with Harriet. Mikey was the last dog to be sired by CH. Empire's Brooklyn Dodger. Dodger was a producer of over 100 beautiful Champions.

Sparkle had a Wonderful Show Attitude and has a Loving Disposition. She finished her Championship quickly and now lives with Bob and Doris in Maryland. She is currently in the process of having her Health Testing, and we are looking forward to having a litter sometime in the near future.

Sparkle also has a brother CH. Rubic's N Normandy's Shining Knight, who is known as Lance. He lives with my friend Eva Milner in Florida, and is a very spoiled and loved pet.