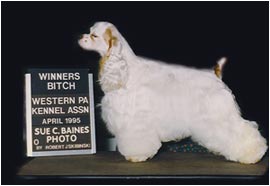 CH Kamps’ N Normandy’s Klass Act (fondly known as Abby) was instrumental as a top producer for Harriet Kamps and me. Her sire was CH JPK N Cashmere’s Red Ransom, and her dam was CH. Kamps’ Klass Klown. Her lineage went back to CH. Kamp’s Kountry Kiss who was Harriet’s top producer with 24 Champions.

Abby was a standout as a puppy and quickly finished her Championship winning multiple Sweepstakes and Best of Varieties handled by Harriet.

Abby produced 12 American Champions, and numerous Champion grandchildren. Her sons, daughters, and grandchildren are multiple sweepstakes winners and American Spaniel Club winners. She had a son who was an Am., Aust., Champion, and one son who was an American, Canadian, and Philippines Champion. Her son CH. Kamp’s N Normandy’s Sami Sosa, had Group placements and is the sire of 10 Champions. Abby’s daughter CH. Normandy-Winters First Klass (Sky) was also a top producer with 12 American and 1 Canadian Championship. Sky produced a daughter CH. DeTor’s Uncharted Waters that went Winners Bitch at the ASC Summer National in 1999 and also went BOS to BV at the ASC Show in January of 2000. Sky’s son, CH. DeTor’s Curtain Call was Best BBE at that same show. Her daughter CH. DeTor’s Do The Math, was WB, BW and BOS to BOV at our ASC Summer National Show in California in 2003. Her son, and 11th Champion, Normandy N DeTor’s City Limits (Austin) was WD at the January 2004 ASC show. He completed his Championship with two 4 point majors, two 5 point majors, a Best in Sweepstakes, and a Best Sporting Puppy all from the 6-9 puppy class, handled by Harriet Kamps. Austin was Specialed in 2005 by Mike and Linda Pitts, and became a Multiple BISS/BIS Winner.

One of our most memorable wins during the first 15 years that Harriet and I co-bred and showed dogs, came during the ASC show in Cincinnati in 1999. Judge Michael Faulkner gave class placements to all 4 of Abby’s offspring by CH. Rendition’s Triple Play, and class placements to 4 of her grandchildren. He then went on to give her granddaughter Winners Bitch, and her daughter Reserve Winners Bitch. What a truly exciting day!